The theme-park giant may be eyeing a blockbuster Marvel franchise as a way to breathe new life into its sagging attendance. 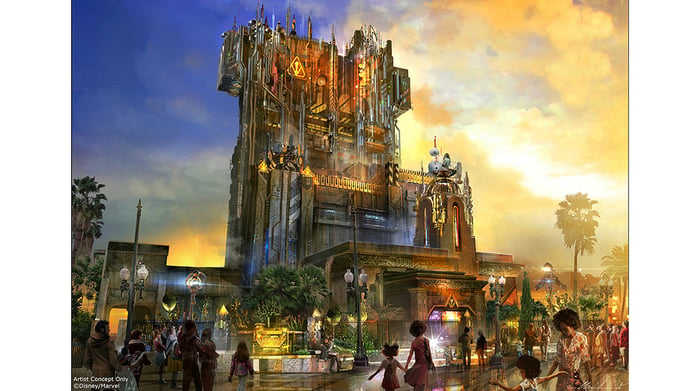 Disney (DIS -1.11%) has been slow to tap its Marvel franchises as fodder for major attractions at its domestic theme parks, but that's starting to change. The media giant announced last month that a Guardians of the Galaxy-themed thrill ride will replace its Twilight Zone Tower of Terror free-fall attraction in California next summer. The current ride will close down early next year at Disney's California Adventure, reopening a few months later as Guardians of the Galaxy-Mission: BREAKOUT! in time for the peak summer tourist season.

The original Twilight Zone Tower of Terror isn't going to go in for the controversial makeover. Disney's Hollywood Studios can't afford to lose more attractions, even on a temporary basis. Large chunks of the park are currently closed to guests as Toy Story Land and Star Wars Land are constructed. Unless it plans to close the entire park, it's not going to close one of the only five actual rides still in operation at Disney's Hollywood Studios.

However, a rumor that keeps gaining momentum is that Disney World will turn to Epcot, opening an entirely different Guardians of the Galaxy ride in the space that's currently housing Ellen's Energy Adventure. WDWNewsToday -- the same Disney World blog that initially broke the ride replacement chatter two months ago -- offered more details on Thursday.

This will be an indoor roller coaster with elaborate scene sequences, WDWNewsToday is reporting. It's being compared to the Escape from Gringotts thrill ride that opened at Comcast's (CMCSA -0.26%) Universal Studios Florida as part of its bar-raising Wizarding World of Harry Potter area two years ago. Details could be out as soon as a Disney park enthusiast event slated for mid-November.

Marvel is going to happen, one way or another

Disney has had to step gingerly through the process of breaking Marvel properties into Disney World. Comcast's Universal Orlando has Marvel Super Hero Island at Islands of Adventure, and it opened long before Mickey met Spidey. The contract governing Marvel's licensing rights through Comcast limits what Disney can do in Florida.

The deal prohibits Disney from incorporating theme-park attractions based on the four franchises that are featured prominently at Comcast's park anywhere east of the Mississippi. That opens up California, but it's a different scenario in Disney World because the four properties -- X-Men, Avengers, Fantastic Four, and Spider-Man -- happen to be Marvel's primary hero catalogs.

A door swung wide open when Guardians of the Galaxy thrilled multiplex audiences two summers ago. It was the third-highest-grossing film of 2014 in the U.S. market, surpassing even the Captain America and X-Men movies that came out that same year. That's not one of the protected franchises in Marvel's earlier contract with Comcast's theme-park division.

Getting ready to ride

Adding an indoor thrill ride -- one that would be Epcot's first roller coaster -- may require gutting the entire existing ride and show building. Purists will cringe, but with Disney World posting back-to-back quarters of year-over-year declines, it will be hard to argue against the winds of change.

Epcot remains Disney World's second-most-visited theme park, but it's actually been one of the slower growing parks in recent years. The park didn't seem to get an attendance boost after adding the initially buggy Frozen Ever After boat ride and the globetrotter spin it gave to Soarin' Around the World in June.

A coaster themed to a hot movie franchise will be more magnetic than a sleepy dinosaur-themed attraction that routinely closes two hours before the rest of the park. Nostalgia breeds tears, pitchforks, and boycott requests, but it's not what drives turnstile clicks.

Disney has been slow to add e-ticket attractions, and it has let Comcast's Universal Orlando gain ground with a more aggressive attitude to updating its nearby theme parks. Disney World, in general, and Epcot, in particular, can use a new thrill, and shareholders won't be satisfied until attendance numbers start moving in the right direction again.