Wildfires were the big story last quarter, but Suncor Energy thinks you should be focusing on these things instead.

After a tough quarter mired by wildfires in near Fort McMurray, Alberta, Suncor Energy's (SU -1.70%) management was surprisingly positive on its most recent conference call. Not only were they happy about Suncor's response to the issue, but how the company foresees much better times ahead that not even this most recent disaster will deter it. Here are five quotes from Suncor's most recent earnings report that shine a light on what management is thinking about today and the future.

1. Wildfires will not deter us

The big story around Suncor's most recent quarterly results was the effect of the wildfires and how they forced Suncor and many other oil sands producers to significantly curtail operations. While this had a huge impact on this one quarter, CEO Steven Williams pointed out that Suncor's employees have mostly brought the company's operations back to 100%.

The results of the fire and the mitigation efforts that we took mean that the threat of damage from a future forest fire incident has been dramatically reduced. We shut in approximately 20 million barrels of Oil Sands production across all of our operations, but we were able to mitigate the financial impact through excellent cost management. In fact, our updated guidance for the year maintains our original cash cost range of $27 to $30 per barrel, and we fully expect to meet that target. So that gives you an indication of what our trend was prior to the wildfire.

The impressive number there is that cash cost range. With so many fixed costs going into oil sands production, it's encouraging for the coming years if the company can keep its overall costs low for the year after losing so much production.

Suncor is pretty much synonymous with oil sands production, but it does have assets in more traditional oil production as well as refining and logistics operations. For the company to be at its best, all of these segments need to be performing well. According to Williams, one of the reasons that this quarter wasn't as bad as it could have been is because these operations did perform well:

[T]he forest fires attracted a lot of focus, this was also an eventful quarter on other fronts as well. Our offshore production is tracking ahead of plan, thanks to strong reliability at Buzzard and Golden Eagle, combined with new wells coming online at Hibernia. And as a result, we've recently increased our production guidance for E&P. In the downstream, reliable operating performance and solid local refining cracks enabled us to generate strong earnings and cash flow, and that was supplemented by a FIFO [First in, First Out] accounting gain as a result of the increase in crude prices during the quarter. These results were particularly notable, given we completed plant maintenance at the Montreal, Sarnia and Denver refineries and dealt with forest fire-related crude shortages and unplanned maintenance at Edmonton during the quarter.

Between now and 2019, Suncor expects to increase production by 6% annually between now and 2019. The two largest projects that will lead to that growth are the Fort Hills oil sands production facility and its Hebron offshore oil platform. According to Williams, Fort Hills remains on track despite a hiccup from the wildfires, and Hebron is right on schedule.

We continued to make significant progress on Fort Hills construction, which is now over 60% complete at the end of the quarter, the remaining work being almost entirely Alberta-based... We continue to target first oil in quarter 4 of 2017, with production expected to ramp up through 2018. Suncor's share of production will be approximately 90,000 barrels per day.

At Hebron on the East Coast, construction of the gravity-based structure and topside continued during the quarter. A major milestone was achieved in late June with the last major module fabricated overseas being shipped on schedule. First oil is anticipated by the end of 2017 followed by a multiyear ramp-up to peak production, and Suncor's share will be about 30,000 barrels a day.

At 120,000 barrels per day net to Suncor, these two projects are more than 60% of all production growth between now and 2019, so getting these projects up and running on time and on budget are critical for Suncor's success.

Like so many oil and gas producers today, Suncor has been in a bit of a cash crunch as of late. The big problem is that development costs for big projects like Fort Hills take years and can't be turned on and off on a dime. According to CFO Alister Cowen, this shouldn't be too much of a long-term problem once Fort Hills and Hebron come on line:

As our growth capital starts to decline starting in 2017, it's easy to see that we'll quickly return to generating free cash flow even at a relatively low forward strip prices and crack spreads. So we have good reason for optimism. Our major Oil Sands maintenance for this year is complete. Production is back up at maximum rates. We're continuing to increase efficiency and to take costs out of the business and advance our organic growth projects. We're also continuing to evaluate opportunities for further profitable inorganic growth. And market conditions have improved to a level that should allow us to generate free cash flow going forward.

This is one of the advantages of oil sands production. Unlike oil and gas wells that decline and require constant capital to maintain production, an oil sands mine doesn't see production slumps for decades. This cash flow profile of the Fort Hills facility shows the difference between it and other oil sources. 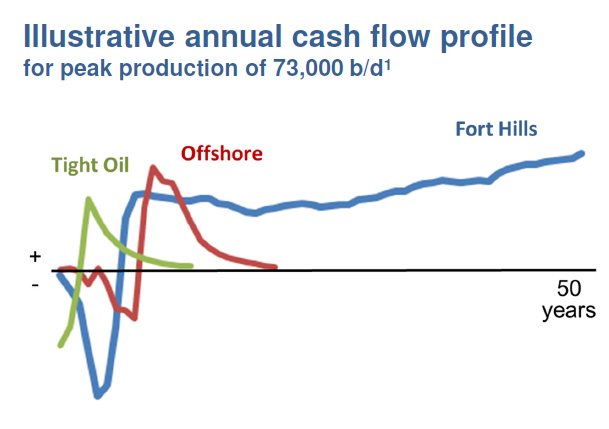 So, once it wraps up spending on Fort Hills, it won't need to spend as much on replacing production dips than other oil companies.

Suncor has been one of the more aggressive companies during this downturn in terms of acquiring weaker competitors. In the past year alone, it has spent $9 billion on acquisitions. According to Cowen, though, the recent share issuance to pay for its most recent purchases and shore up the balance sheet sets the company up for potentially more acquisitions in the near future.

Suncor's strong balance sheet has been a competitive differentiator for these past 2 years of weak oil prices. During the second quarter, we took a number of actions to ensure continued strength going forward. We issued $2.9 billion of equity to fund the acquisition of Murphy's 5% interest in Syncrude and to reposition the balance sheet for further potential acquisitions.

Cowen did also clarify that the company isn't aggressively pursuing anything today, but it has the flexibility to make a move if someone else approached Suncor with an irresistible offer.