Warren Buffett-led conglomerate Berkshire Hathaway (NYSE:BRK.A) (NYSE:BRK.B) has the most expensive publicly traded stock in the world. While the massive Class A shares have never split in the company's history, the company created Class B shares and has since split them 50-to-1 in order to make Berkshire accessible to all investors.

Berkshire Hathaway class A shares were the only ones in existence until 1996. The A shares currently trade for about $223,000 apiece, and they have been an unusually expensive stock for decades. For a while, Warren Buffett was adamant that the company's shares would never split. And technically, Buffett has been true to his word: Berkshire's Class A shares haven't split yet. 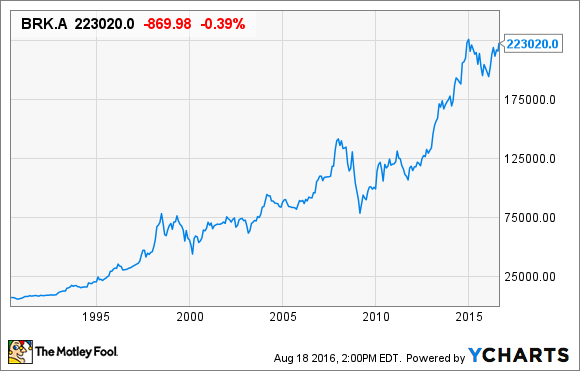 In the mid-1990s, with Berkshire's share price above the $30,000 level, investing alongside Warren Buffett was prohibitively expensive for millions of retail investors. Investment companies were threatening to create unit trusts with Berkshire shares, which would buy shares and sell fractional interests in them to shareholders.

Buffett was strongly opposed to this concept -- even more than he was to splitting his stock. As he said to shareholders in his 1996 annual letter:

[...] we made this sale in response to the threatened creation of unit trusts that would have marketed themselves as Berkshire look-alikes. In the process, they would have used our past, and definitely nonrepeatable, record to entice naive small investors and would have charged these innocents high fees and commissions.

Buffett went on to say that not only would this turn Buffett's beloved company into a way for investment advisors and salespeople to profit from unsuspecting small investors, but it also had the potential to create a speculative bubble in the company's stock. This would cause volatility and potentially tarnish Berkshire's stellar reputation.

The creation of the Class B shares

To stop these unit trusts before they began, Berkshire decided to create a new class of stock, the Class B shares, also known as the "Baby Bs," initially selling 517,500 shares in 1996. Each of the newly created shares had 1/30th of the ownership interest of the Class A shares, and just 1/200th of the voting rights.

Immediately, this created a relatively low-cost way for people to invest in Berkshire Hathaway -- as the Class B shares initially traded for just over $1,000. The issue was open-ended to prevent an IPO pop caused by scarce supply, and it was marketed as an appropriate investment for long-term investors only. About 40,000 people initially bought the Class B shares, and trading volume (flipping) was low for a new issue, indicating that many of the initial buyers listened to the company and held on to their shares.

In addition to the disproportionately low voting rights, it's also important to mention the B shares' conversion structure. Class A shares are convertible into Class B shares at any time, but not the other way around. This, combined with the voting rights, ensures that big investors typically choose the Class A shares. Owners of both share classes have the right to attend the company's famous annual meeting.

A 50-to-1 split made Berkshire even more accessible

However, this means while the Class A shares trade for more than $223,000 today, investors can buy Class B shares for less than $150, truly making Berkshire accessible to retail investors. In fact, Berkshire Hathaway is a cornerstone of my own portfolio, which wouldn't be the case if the Class B shares had never been created.