A 2.8 zero-to-60 time for Tesla Motors' (NASDAQ:TSLA) all-electric four-door Model S apparently wasn't fast enough. On Tuesday, the company announced a faster version of its Model S, capable of going from zero to 60 miles per hour in just 2.5 seconds. Here's everything there is to know about the new flagship Model S and its new P100D Model X counterpart. 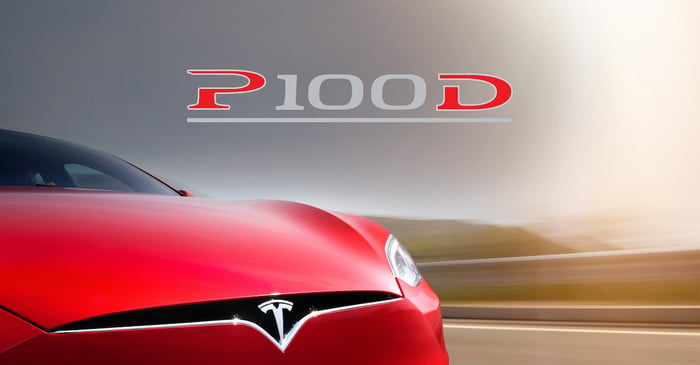 Acceleration: Tesla's new P100D Model S achieves a zero-to-60 mph time of 2.5 seconds when Ludicrous mode is enabled. The only two faster-accelerating production cars ever made are the LaFerrari and the Porsche 918 Spyder. Though, as Tesla points out in a blog post, they "were limited-run, million-dollar vehicles and cannot be bought new."

This acceleration is a particularly impressive achievement, considering the Model S is a large vehicle, capable of seating five adults plus two children in its rear-facing seats. In addition, the Model S boasts significant storage capacity, with a large hatchback, foldable back seats, and a front trunk.

The new P100D version of the Model X, which can seat up to seven adults, can accelerate from zero to 60 mph in 2.9 seconds -- making it the world's quickest SUV by a huge margin.

Range: The new P100D Model S can drive 315 miles on a single charge, giving it the longest range of any production electric car by far. This is up significantly from the 294 and 270 miles of range Tesla's 90D and P90D Model S are rated for, respectively.

Battery: As its name suggests, the P100D Model S and Model X are both equipped with a new 100 kWh battery.

Price: This performance comes at a steep price, but nothing close to the price of cars with similar acceleration.

Availability: Depending on the market customers order from, those who order today could have their P100D delivered to them as early as next month.

While it may be the P100D's acceleration that's making headlines, the most intriguing takeaway for investors is the driving range Tesla is able to pack into the same-sized battery pack. Sure, the P100D is expensive. But as Tesla's offerings move well over 300 miles with a battery pack size the company could only get to 265 miles on a single charge when the first Model S deliveries started in 2012, the automaker is previewing a future where electric cars aren't just better performing than gas-powered cars but can drive just as far -- or maybe even further.