Someone forgot to tell the Permian Basin that the oil industry is in the midst of its worst downturn in nearly three decades. Instead, the legacy oil basin remains one of the hottest oil plays in the world. Drillers are investing billions this year to not only drill wells but to snap up additional acreage in the play. Fueling this boom is the fact oil saturates the rocks within the basin, and that oil is inexpensive to get it out of the ground. That combination is fueling robust drilling economics even in the current environment.

While the overall level of activity in the Permian Basin is healthy, its eastern half, the Midland Basin, is particularly hot right now: 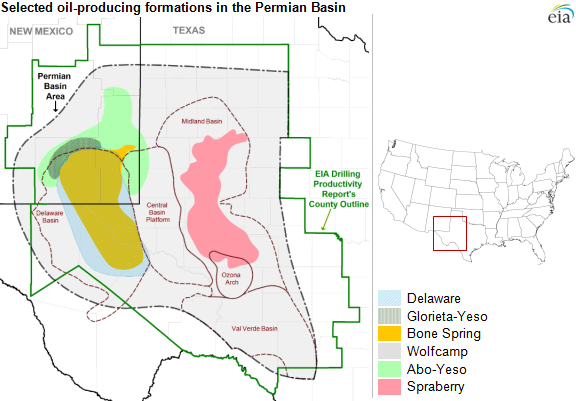 That is because the two shales within the Midland Basin, the Spraberry and the Wolfcamp, are just loaded with oil and gas. According to data from leading Midland Basin driller Pioneer Natural Resources (NYSE:PXD), these rock formations hold an estimated 75 billion barrels of oil equivalent resource potential. For perspective, that makes it the second biggest oil field in the world behind the vaunted Ghawar field in Saudi Arabia. Furthermore, like that legendary Saudi oil field, the production costs in the Midland are near the bottom of the barrel with Pioneer noting that some production costs are as low as $2.25 per barrel. That led its CEO, Scott Sheffield, to say that "definitely we can compete with anything that Saudi Arabia has."

Because of the play's economics and resource potential, Sheffield's "firm belief is the Permian is going to be the only driver of long-term oil growth in this country. And it's going to grow on up to about 5 million barrels a day from 2 million barrels." Clearly, his company and its rivals believe that to be true, which is why they are pumping so much money into the play despite the industry's current doldrums. Pioneer, for example, recently spent $435 million to acquire 28,000 net acres to bolster its industry-leading position in the play. On top of that, it is spending $1.87 billion of its $1.95 billion drilling budget on the Permian.

Others are following its lead. Canadian producer Encana (NYSE:OVV) paid $7.1 billion to acquire a position in the Permian in late 2014. As a result of that transaction and other investments in the play, Encana is now the second largest producer in the Midland Basin behind Pioneer Natural Resources. Encana is not just growing for the sake of growth; its Midland Basin position has some of the best economics in its portfolio, which is why it earmarked more than half its capex budget to the basin.

Those compelling economics are leading other producers to pay up to acquire additional acreage in the play. For example, earlier this month, Concho Resources (NYSE:CXO) paid $1.625 billion to buy 40,000 more acres in the region, expanding its position to 150,000 net acres. Meanwhile, rival SM Energy (NYSE:SM) paid an equally astounding $980 million to acquire 24,783 acres, which doubled its position in the play. What's noteworthy about those prices is that SM Energy paid $39,500 per acre while Concho Resources paid $40,625 an acre, which were well above the $25,000 to $35,000 acre producers had been paying to acquire acreage in the play. Those prices show that companies are willing to pay a premium for prime drilling acreage, even in the current oil market because of just how good the returns are right now.

Oil producers expect big things out of the Midland Basin. That is why they are not only diverting the bulk of their capex budget to the region, but are willing to pay up to bolster their position. Needless to say, it is an oil play investors should have on their radar because it could drive solid returns even if oil prices remain weak.