Brookfield Infrastructure Partners (NYSE:BIP) is an income investors' dream. Not only does it pay a very generous quarterly distribution, but that payout has grown by a 12% compound annual growth rate since 2009. Further, even after two distribution increases this year, the company is primed for more income growth in 2017. Though, it needs to complete several strategic initiatives to hit the higher end of its growth target.

Driving Brookfield Infrastructure Partners' ability to push its payout higher is its ability to grow its cash flow through a combination of organic growth initiatives and acquisitions. Organically, the company's current portfolio of infrastructure businesses are expected to increase funds from operations (FFO) by 6% to 9% per year: 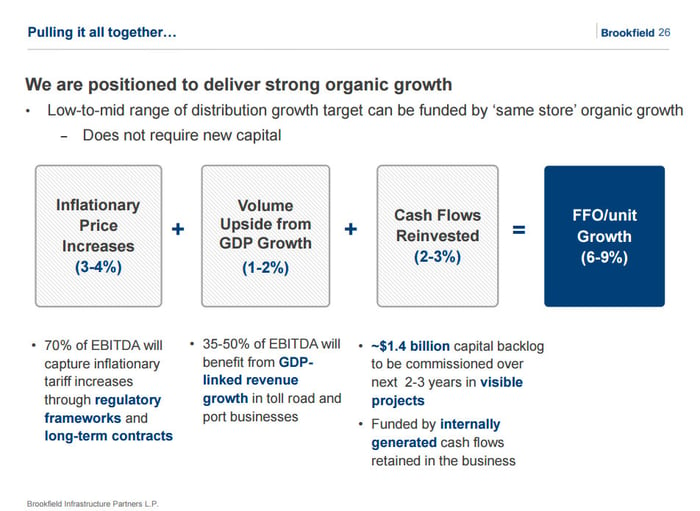 In addition to that, Brookfield Infrastructure Partners has a long history of making needle-moving acquisitions. For example, it was able to grow its FFO per unit by 12% over the past year thanks in part to recent acquisitions, which included increasing its ownership interest in its North American natural gas transmission business and its Brazilian toll roads. On top of that, it recently closed several acquisitions, including buying a stake in a North American gas storage business and a portfolio of toll roads in Peru. Meanwhile, it is nearing the finish line on acquiring an interest in an Australian port and rail logistics business.

Because of the clear visibility it had on closing those transactions, the company recently boosted its payout by 3.5%, which was in addition to the 7.5% increase it gave investors earlier this year. As a result, its total distribution increase was 11% over last year's rate, which was consistent with its guidance to provide 11% to 13% distribution growth if it met certain growth targets.

The catalysts for high-end growth in 2017

These investments put the company in the position to boost its payout again in 2017. In fact, the company noted that "should we continue to execute our current growth initiatives as anticipated, we believe that our next increase may be at the higher end of our annual distribution growth range" of 5% to 9% per year. That said, everything has to go according to plan for the payout to increase by 9% early next year.

That plan hinges on the company completing two major acquisition opportunities it is working on. First, it is participating in a consortium that is in exclusive negotiations to acquire a natural gas transmission company in southern Brazil from beleaguered oil giant Petrobras (NYSE:PBR). Brookfield's parent company, Brookfield Asset Management (NYSE:BAM), entered the exclusive talks with Petrobras in early May after it submitted the winning bid of $5.2 billion for the pipeline unit. Brookfield Infrastructure Partners committed to investing a minimum of $700 million into the transaction if those negotiations result in Brookfield Asset Management closing the deal with Petrobras. That investment would give it a stake in a business that is 100% contracted under long-term ship-or-pay agreements, meaning it will collect cash flow on that purchase from day one.

In addition to that, Brookfield Infrastructure Partners won the right to build a portfolio of greenfield transmission lines in Brazil. Because of that, it is now in discussions with several sellers to acquire operating assets in the country to establish a business with substantial scale. If it is successful in those transactions, it would not only buy cash flowing assets, but would have the ability to deploy up to $200 million over the next few years to complete its electricity transmission projects.

As 2017 rolls around, if Brookfield has the clear visibility that these transactions will close, then it will likely boost its distribution by 9% early next year. However, if the Petrobras deal, in particular, falls through, then the payout will probably only go up by 5%. That is unless the company can replace that transaction with a similar investment in both size and cash flow generating ability.

Brookfield Infrastructure Partners has a long history of increasing its payout, which isn't likely to come to an end next year. Instead, the company has the potential to deliver high-end distribution growth if it closes all the transactions in its pipeline. That said, even if those deals fall through, the company has enough organic growth embedded in its portfolio to push the payout higher next year.