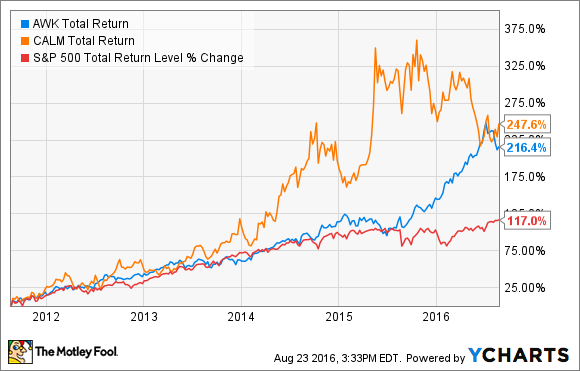 Are you looking for a mid-cap or larger, dividend-paying stock that has a great track record (at least tripling) over the last five years and has long-term growth prospects that appear attractive? Many of the stocks that have at least tripled in price -- or soared at least 200% -- over the last five years are speculative, more than just rarely unprofitable, or have small capitalizations, and don't pay dividends.

American Water Works stock meets the criteria of at least tripling in price over the last five years: It's up 216% over this period through late afternoon trading on Aug. 23. It also meets my own "at least about 2%" yield criteria for calling a stock a "dividend stock," as it's yielding 1.9%. And its $13.6 billion market cap makes it a large-cap stock (a stock with a market cap of $10 billion or more).

American Water Works is the largest investor-owned water and wastewater utility in the U.S., providing services to approximately 15 million people in 47 states and Ontario, Canada. The 47-state footprint includes its regulated and market-based businesses, with its regulated business operating in 16 of these states.

Its smaller market-based business is comprised primarily of American Water Enterprises Group and Keystone Clearwater Solutions. AWE primarily builds, operates, and maintains water systems for military bases, while Keystone supplies water and related services to natural gas exploration and production companies in the Appalachian Basin. American Water Works' management expects Keystone, acquired in July 2015, to have a neutral effect on earnings this year, though continues to be optimistic about its long-term potential.

The company's revenue grew 5.8% in the second quarter, while earnings per share gushed 13.2%. Management has guided for 2016 earnings in the range of $2.75 to $2.85 per share, representing year-over-year growth of 6.1% at the midpoint. Moreover, management said on the recent earnings call that the company is on track to meet its goal of increasing EPS at a 7% to 10% compounded annual growth rate over the five-year period of 2016 through 2020 (using 2014's earnings as a base).

American Water Works' performance -- and hence, its stock price -- should continue to be a long-term winner. The company's industry-leading size provides it with the resources to make acquisitions in what's an extremely fragmented industry. Its geographic diversity means that it can often acquire new systems without adding full new management teams because it expands in areas near where it already has operations. Cal-Maine Foods stock meets our criteria of at least tripling in price over the last five years: It's up 248% -- so it's between a triple and a quadruple. It significantly exceeds our dividend-yield hurdle of "about 2%," as it's trailing 12-month yield is 5.6%, while its $2.1 billion market cap means it just jumps the $2 billion mid-cap bar.

A word about the dividend before we move on: Cal-Maine pays a variable dividend. In each quarter that it reports a net income, it pays a cash dividend to shareholders of one-third of the quarterly income. This is a prudent policy because the company's financials are very affected by the price of shell eggs, which is a factor it can't control.

Cal-Maine is the largest producer and distributor of fresh shell eggs in the U.S., with an approximate 23% share of the domestic shell egg consumption market. It has a sizable and fast-growing specialty egg business, which includes organic eggs, nutritionally enhanced eggs, and much-in-demand cage-free eggs. Just about every major egg buyer, including retailers like Wal-Mart and Costco and fast-food chains like McDonald's, has pledged to buy only eggs laid by cage-free hens by a certain date -- mostly 2020. Cal-Maine's industry-leading size should enable it to scale up more quickly than its competitors to meet the growing demand for these eggs.

Cal-Maine's fiscal year 2016 revenue jumped 21.1%, while earnings per share surged 96% from fiscal 2015, as it reported last month. Investors shouldn't expect this type of blow-out performance going forward. The price of shell eggs soared in the first two quarters of the fiscal year following the avian flu outbreak in the U.S. in the spring of 2015. (None of Cal-Maine's flock tested positive for the virus.) It then fell to a decade-low level during the fourth quarter before recovering a portion of these declines. This unusually extreme volatility is reflected in the chart at the top of this article.

The stocks of American Water Works and Cal-Maine have had great five-year runs. While one or both may pull back over the short or intermediate terms, each should continue to be a long-term winner. These are well-run companies that are the leaders in their respective industries. As such, the companies have the resources to continue to gobble (or drink) up other companies in their fragmented industries, and otherwise benefit from economies of scale.

Cal-Maine is a volatile stock, so it would likely make investors who have appetites for more stable stocks feel very scrambled.