The mine that really matters

Royal Gold invested $781 million in Mount Milligan between 2010 and 2013, helping to fund the mine's development. In exchange, Royal Gold gets 52.25% the mine's gold at a cost of $435 an ounce. The mine achieved full capacity late last year. 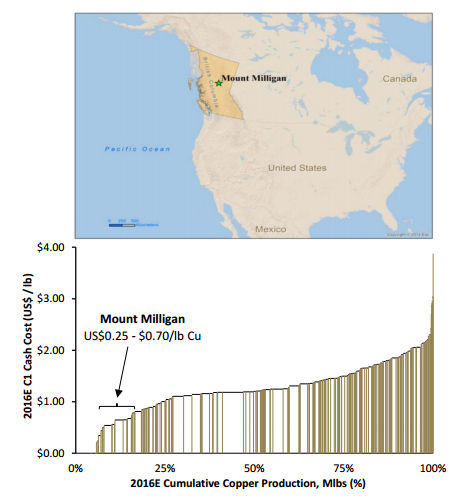 A snapshot of Mount Milligan mine. Image source: Royal Gold.

Mount Milligan is a well-positioned mine, producing copper and gold. It's located in Canada, placing it in a politically stable region. It's a very low-cost mine, with it's copper operations in the first quartile of the production cost curve. And it has a remaining mine life of over 20 years. There may even be some potential to increase production from current levels. In other words, it's the kind of mine you'd want to have a streaming deal with.

It's also a very important asset to Royal Gold's future. The mine represented roughly 22% of revenue in fiscal 2015. That grew to roughly a third in the just-ended 2016 fiscal year. Which is why Thompson Creek's precarious financial position was such a concern for Royal Gold.

Earlier this year Thompson Creek had a market cap of roughly $110 million and debt of around $900 million. Most of that debt came about from the construction of the Mount Milligan mine. Roughly $300 million worth of debt was coming due over the next year or two, too, leading some industry watchers to call Thompson Creek's debt situation unsustainable.

Which is why Royal Gold was willing to make some adjustments to its streaming deal to shore up the finances of a key asset. In this case, Royal Gold worked with Thompson Creek and Centerra Gold (NYSE:CAGDF). Centerra has agreed to buy Thompson Creek for roughly $1.1 billion. The key part of the deal, however, is that the purchase price includes the payoff of Thompson Creek's debt. Centerra is financially stronger than Thompson Creek (at the end of the second quarter Centerra had no long term debt and over $500 million of cash and equivalents on the balance sheet), meaning that a key Royal Gold mine is now in better financial hands.

But Royal Gold had to make changes to get this deal done. Assuming the acquisition is completed, Royal Gold's 52.25% gold streaming interest at Mount Milligan will drop to a 35% gold stream and it will pick up an 18.75% copper stream. Royal Gold will pay the same $435 per ounce of gold and will start paying 15% of the spot price per metric tonne of copper. It believes the net impact will be revenue neutral and, obviously, its costs will remain pretty low.

The new partner and the old. Image source: Royal Gold.

Shoring up the cash stream

There are multiple benefits from the changes at Mount Milligan. First, Royal Gold's concessions strengthen the financial position of a key mine, placing it in stronger hands. That's a much better outcome than having to work through a bankruptcy situation.

Second, although the streaming company's interest in the mine has shifted, its financial take from the mine is expected to be roughly the same -- so, at this point, Royal Gold hasn't taken a financial hit from the alterations (volatile commodity prices could obviously change that). And third, it further diversifies Royal Gold's revenue streams, which are focused on gold but have in recent years broadened out to include other commodities, like copper.

If you were to ask if this was the ideal outcome, the answer would be no. The ideal outcome would have been that Thompson Creek didn't run into a debt wall. But, given the situation Royal Gold was confronting, helping Centerra buy Thompson Creek looks like it was a pretty good call and easily the biggest, and best, move that Royal Gold has made so far in 2016.