Uranium was one of the best-performing commodities in 2015, but it has been pretty weak so far in 2016. Which is bad news for Cameco Corporation (NYSE:CCJ), the world's largest publicly traded uranium miner. But that doesn't mean you should run for the hills, because the future could still be bright. In fact, here are the three biggest opportunities for Cameco Corporation.

The primary use for uranium is to fuel nuclear power plants. And that's opportunity No. 1, with a big exclamation mark. Between 2013 and 2035, global energy consumption is expected to grow by nearly 60%. There's a lot underpinning that, but growing demand is largely coming from developing nations.

Nuclear power looks like it will be a key part of the picture for some of the largest and most populous developing nations as they try to meet their residents' demands for electricity. For example, China has 21 reactors under construction, and India has six. In total, there are 60 nuclear power plants in some stage of construction around the world today. So, even though there's talk of power plants shutting down in some developed markets, don't lose sight of the bigger picture. 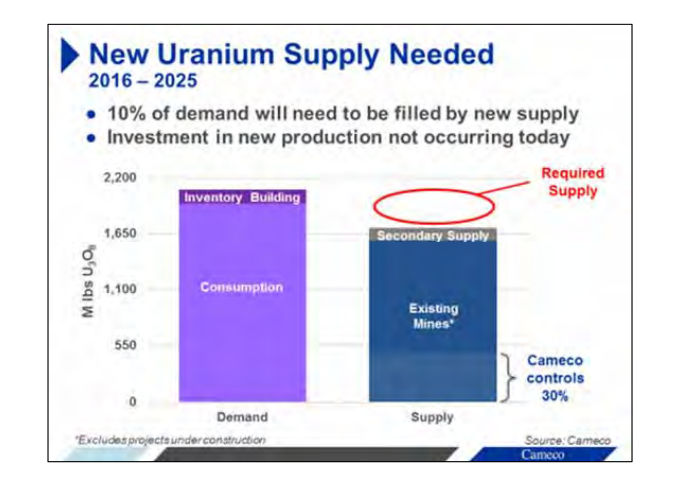 The next big opportunity is that there's an oversupply of uranium pressuring prices today. While you may think that's a negative (it is today), it's also a long-term positive. With all the new power plant construction, supply and demand will eventually even out. That will help firm up uranium prices.

However, while the industry is waiting for that to happen, some miners are reacting by pulling in their horns because of low prices. For example, Cameco is planning to reduce capital spending by 30% this year; it came in roughly 7% below its original budget last year. In fact, the company's planned exploration spending is less than half what it was in 2012, when uranium prices were higher. That's good for today, since the cutbacks will help align Cameco's business with the current environment, but there's a long-term impact.

When demand catches up to supply, there may not be enough uranium to go around. There's no way to tell exactly when the gap between supply and demand will close, but over the next 10 years or so, the picture starts to look tough for uranium users. According to Cameco, 10% of projected demand will have to be filled with new supply, but there's a problem if miners like Cameco aren't spending to meet that future demand because of low uranium prices. So, there's a big potential catalyst for uranium prices out there once all of the power plant construction taking place starts to push demand higher. 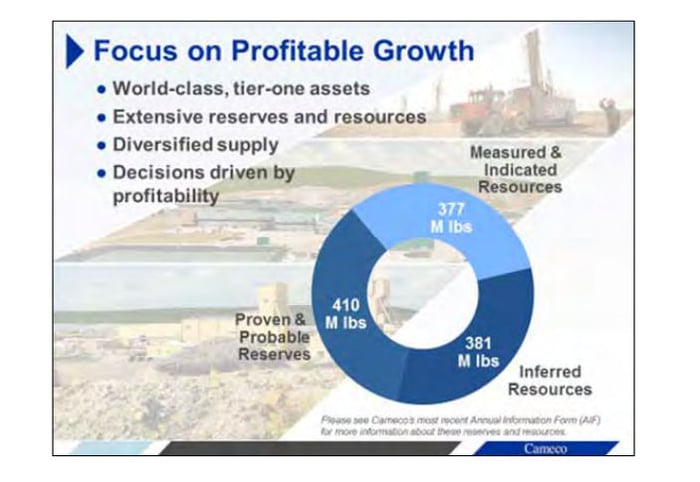 Cameco is ready for that demand when prices do start rising. It has around 400 million pounds of proven and probable reserves, and another 700 million pounds of reserves that it believes it can tap in the future. That 700 million pounds falls into less-certain reserve categories largely because the company hasn't tried to dig it up yet. But as demand comes on and prices head higher, Cameco will be able to go after that uranium.

Oversupply is bad for today, but rising demand and companies like Cameco cutting back on development should sow the seeds for the next upturn. And Cameco is ready for it.

There's uranium demand brewing in the future because of nuclear power plant construction. And it doesn't look like there's enough spending taking place to meet that demand. Put together, those facts are setting the foundation for higher prices down the line. The problem, then, is to get from here to there.

That's where the third big opportunity comes in. Cameco is financially strong enough to get through this downturn. There's no question it's been tough -- Cameco's bottom line has fallen from over a dollar per share as recently as 2011 to just $0.16 a share in 2015. The company has lost around $0.15 through the first half of 2016, largely because of an impairment charge, so things remain difficult. But analysts are still expecting the company to remain profitable for the full year. Taken as a whole, however, Cameco appears to be at least holding its own on the earnings front despite the difficult market it's facing.

Meanwhile, on the balance sheet, long-term debt makes up only around 20% of Cameco's capital structure. That's a relatively modest amount amount of debt in a capital intensive industry like mining. Interest expenses only ate up around 6.7% of revenues in the second quarter. Note, too, that the company continues to pay a dividend. Although it hasn't been increased since 2011, it hasn't been cut, either -- which is a notable statement during an industry downturn like the one Cameco has been facing. Even giant miners like Rio Tinto (NYSE:RIO), which has a tiny uranium operation relative to its broader business, has been forced to trim its dividend.

In other words, Cameco appears to have the financial strength to see itself through the downturn. And, equally important, it should also have the wherewithal to invest in its business when the upturn eventually comes along. The company's financial strength, then, is the third big opportunity, because it really provides the foundation on which Cameco can take advantage of the future.

Not for the feint of heart

It looks like there are three big opportunities for Cameco Corporation to prosper in the future, including growing demand for electricity, potential uranium supply shortfalls, and a solid enough financial foundation to survive a difficult period so it can prosper when good times come along again. That's all great news, but if you're a conservative investor, the uncertainty surrounding Cameco today probably isn't something you'll want to get involved in. For investors who have a long-term bent and can stomach a little adversity, Cameco could be a great way to play global growth and the electricity demand that's going to go along with it. A 3.2% dividend yield, meanwhile, is icing on the cake.