In Berkshire Hathaway's (NYSE:BRK.A) (NYSE:BRK.B) latest Securities and Exchange Commission filing, it was revealed that the company boosted its stake in Apple (NASDAQ:AAPL) by 55% during the second quarter and sold a significant number of its Wal-Mart (NYSE:WMT) stock, to name the two most significant moves. While I never advise buying or selling a particular stock just because a billionaire does, here's what investors should learn from these moves.

Adding to Apple while it's cheap

During the second quarter, Berkshire added another 5.42 million shares of Apple to its portfolio, increasing its stake by 55%. And, to be fair, the Apple investment isn't Buffett's doing -- rather, one of his stock pickers pulled the trigger on the tech giant. However, the Apple purchase and its subsequent add-on are very Buffett moves. Here are a few Apple characteristics that Buffett tends to look for:

I could go on, but the point is that even though Buffett didn't decide to invest in it, Apple certainly makes sense in Berkshire's portfolio. And while we don't know exactly when Berkshire added on to its Apple holdings, or at what price, I suspect that a major reason was simply that Apple got even cheaper during most of the second quarter. 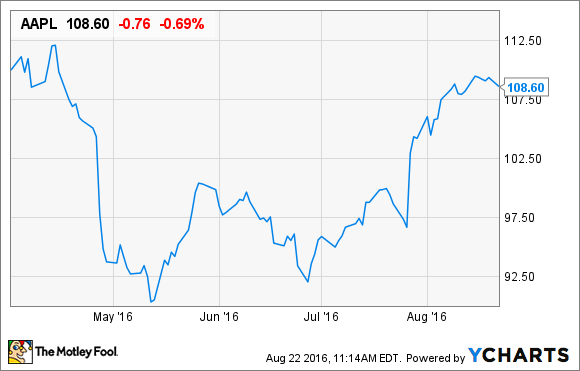 This is one of the most valuable lessons any long-term investor can learn. When you do your research and buy the stock of an excellent company and it proceeds to drop like a rock, don't panic and sell. Instead, look at it as a valuable opportunity to add to your position at a discount. And I believe that has a lot to do with Berkshire's increased stake.

Know when to walk away

During the second quarter, Berkshire sold 27% of its Wal-Mart stake, leaving Berkshire with 40.2 million shares. This follows the smaller unloading of 950,000 shares during the first quarter. While 40.2 million shares of Wal-Mart are still worth nearly $3 billion -- no small chunk of change -- I have a feeling the selling is not done just yet.

To explain why, consider the reasons why Buffett bought Wal-Mart in the first place. Berkshire started to accumulate Wal-Mart shares rather aggressively in 2005 and more than doubled its stake in the years following the financial crisis.

First of all, at the time Buffett bought Wal-Mart, shares were trading cheaply. In the 2009-2012 period, when Berkshire accumulated about 26.7 billion shares, Wal-Mart was trading at price-to-earnings multiples between 11 and 15. Today, Wal-Mart trades for about 16.4 times TTM earnings. What's more, the company's revenue and especially its earnings growth was much better when Buffett was buying.

In a nutshell, the high earnings growth and low valuation of the 2009-2013 period made Wal-Mart highly attractive. The higher valuation of today combined with two out of three years of negative EPS growth, not so much.

Furthermore, Wal-Mart has more of an identifiable competitive advantage in those years. Amazon.com has since evolved into much more of a competitive threat, and Buffett even said in May that Wal-Mart is under pressure to compete with Amazon.

It remains to be seen whether Berkshire intends to completely wind down its position in Wal-Mart or if it simply wanted to reduce its exposure to a potential price war with Amazon. Either way, the lesson is clear: When your original reasons for buying a stock no longer apply, it's OK to rethink your investment and, if necessary, head for the exits.

Warren Buffett is perhaps the most closely followed investor in the world, not just for the particular stocks he buys but for the timeless investing lessons that can be learned from what he buys and sells. The point here is not that you should buy Apple or sell Wal-Mart, but to apply these lessons to the stocks in your own portfolio and to stocks that you're considering.