There's an easy answer for why Teck cut its dividend in 2015. The miner's main products are metallurgical coal (roughly 35% of its business), copper (35%), and zinc (30%). All three have felt the heat of falling commodity prices since 2011. The company's met coal operations have been particularly hard-hit by a heavily oversupplied steel market, the industry that uses this variety of coal. 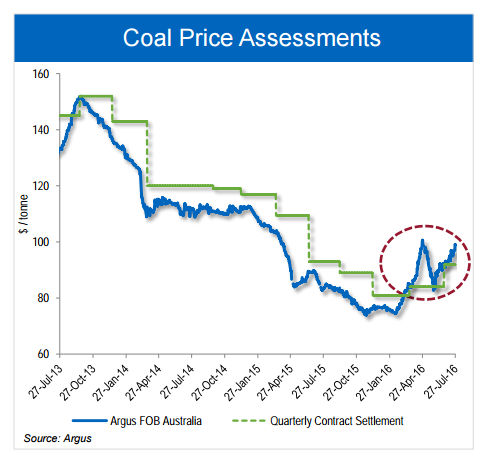 From a distance, the cut was because of a weak commodity market. The numbers back that up, too. In 2015, met coal's price fell 19%, copper dipped 20%, and zinc dropped 11%, according to Teck. Coal and copper prices declined 23% and 6%, respectively, in 2014, too. So, clearly, that's a big piece of the puzzle, but it isn't the only reason for the dividend cut. That helps explain why a dividend hike in 2017 isn't likely.

First, Teck made a decision to add another commodity, oil, to its portfolio in late 2013. The company is working with Suncor Energy (NYSE:SU) and Total (NYSE:TTE) to build an oil sands project, known as Fort Hills, from the ground up. Teck owns 20% of the project, Suncor a little over 50%, and Total the rest. Since oil sands are mined, not drilled, this fits well with Teck's business.

However, oil prices were high when the project got approved. Prices started to fall, hard, in mid-2014, so the project started to look a lot less desirable just a few months after it got the green light. In fact, Total sold 10% of its stake to Suncor in an effort to reduce its exposure to the oil sands last year. But Teck is sticking with its stake, and it's still on the hook for its share of the mine's expenses. That bill amounted to billions of dollars at the time it started to cut its dividend.

Which brings up reason No. 2 for the dividend cut: debt. The company's top and bottom lines were under pressure from falling commodity prices, it was facing big bills for Fort Hills, and debt obligations were heading higher while its cash reserves were shrinking. To put some numbers on this, the company's net debt increased roughly 55% between year-end 2013 and year-end 2015. Cash on the balance sheet, meanwhile, fell about 30% over that same span. Some of this was due to currency fluctuations, but that doesn't change the fact that Teck's financial picture was getting worse, not better.

The full picture for the dividend cut is that commodity prices were falling at the exact time Teck needed cash to pay for a big project. And the health of its balance sheet was getting worse, not better. So, one of the ways the miner chose to save money was to trim the dividend. Although not exactly great for income-seeking shareholders, it was a good financial decision.

Teck, however, has been doing more than just that. For example, along with every other miner, it's been cutting costs throughout its business. And it pushed its debt maturities out so that it doesn't face any significant maturities until 2021. That should give it plenty of time for the Fort Hills project to get up to speed, and it's why you shouldn't expect a dividend hike in 2017.

Teck still has to come up with around $1 billion to get the Fort Hills project done. However, Fort Hills won't start producing oil until late 2017, if everything goes as planned, and it won't reach full production until a year or so after the project produces its first oil. So, even though Teck has gotten its financial house in better shape, it still has big bills to pay for Fort Hills before it sees any financial benefit from the project.

So, despite commodity prices starting to recover somewhat, Teck will likely err on the side of caution and keep its dividend where it is in 2017. Once the bills for the Fort Hills project are paid off and, more importantly, material oil starts flowing, things might change. But until that point, which likely won't be until 2018, don't count on a dividend hike.