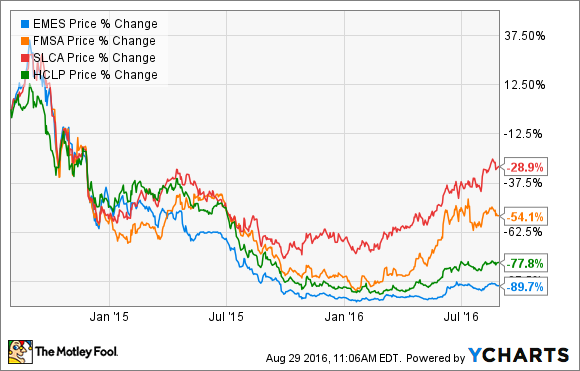 However, despite that abysmal recent past, silica stocks appear poised for a bright future. Not only is the oil market starting to show signs that activity has bottomed, but producers are using a lot more sand per well, which suggests that sand volumes could surge once oil and gas activity rebounds. This future potential already fueled an enormous rally this year: 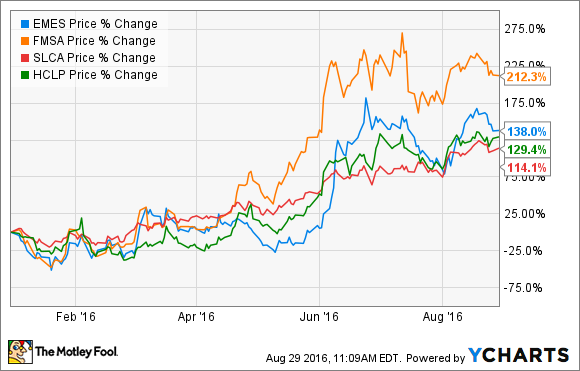 That said, given how far these stocks have fallen, they could have a lot more room to run.

Industrial sand, or silica, is an essential mineral for glassmaking, filtration, and as a building material. However, industrial demand for silica pales in comparison to surging demand from the oil and gas industry for fracking. That is because oil and gas producers found that pumping sand (also known as a proppant) and water at high pressure down a horizontal well bore was a key ingredient to unlocking oil trapped in tight rock formations. The sand propped open the tiny cracks in shale formations, which enabled oil and gas to flow out more easily, improving production rates. The ensuring production boom drove remarkable volume growth for silica producers.

Unfortunately, the recent downturn in oil prices caused volumes to plateau and then decline at the major frack sand producers: 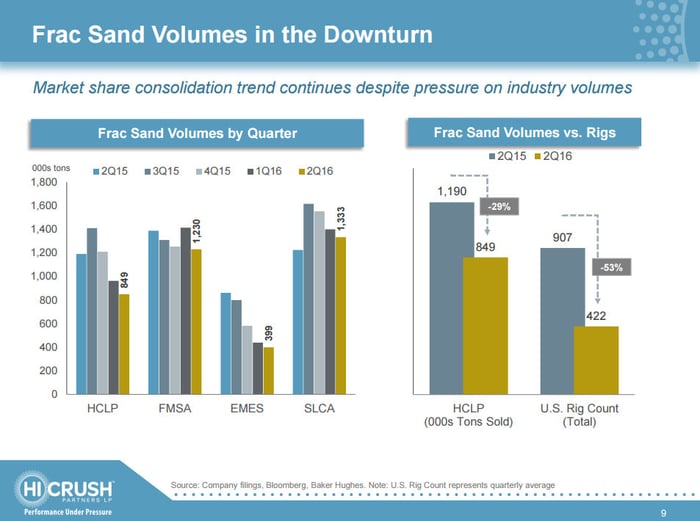 However, while volumes are going down, they are not down as steeply as the rig count because oil companies are finding that using more sand volume per well is the key to improving production rates. Because of that, proppant volumes are poised to surge when oil and gas activity rebounds, which has the potential to drive silica producer earnings much higher.

U.S. Silica is by far the leading silica company. Not only does it control more than 20% of the raw frack sand market, but it controls no. 1 or no. 2 positions in industrial and specialty product markets such as glass, building products, and filtration. U.S. Silica's frack sand market share is growing because it is taking advantage of the oil market downturn to consolidate the sector, and has already announced four transactions this year. That growing scale, when combined with its solid balance sheet, puts U.S. Silica in the position to create tremendous value when oil and gas activities rebound.

Like U.S. Silica, Fairmount Santrol is a diversified silica company, which has helped mute the blow from the oil market downturn. That was evident last quarter when its overall volumes only declined 8% despite the fact that volumes in its proppant solutions segment were down 15% sequentially. A 13% sequential uptick in volumes from its industrial and recreational product segment partially offset the decline in frack sand volumes. That said, the overall weak frack sand market is putting tremendous pressure on Fairmont Santrol's bottom line, with the company reporting a net loss of $88 million last quarter. However, it is working to overcome those issues by cutting costs and raising capital so that it will be in a position to capture opportunities in a future rebound in the oil market.

Hi-Crush Partners is a bit different from its diversified rivals. Not only is it a pure-play frack sand producer, but it is an MLP. Because of that it was far more exposed to the oil market downturn, which resulted in the suspension of its distribution so it could use that cash to bolster its balance sheet. That move is paying off, with the company securing its financial position to the point where it had the financial flexibility to acquire another frack sand facility, which boosted its processing capacity by 60%. As a result, the company boasts a significant low-cost position in the market, which gives it plenty of upside when oil and gas activities improve.

Emerge Energy Services is very similar to Hi-Crush Partners in that it is a pure-play MLP. However, it just recently became a pure-play after selling its fuel segment earlier this year. That sale was critical to the company because it needed that cash to bolster its balance sheet so that it can make it through the oil market downturn. At the moment, improving its financial situation remains its top priority. That said, Emerge Energy Services has plenty of excess capacity across its facilities to ramp up sales volumes quickly into a recovering oil market. Once those volumes emerge, it could fuel a significant recovery in its unit price.

The oil market downturn hurt demand for frack sand, weighing on silica stocks. However, after undertaking actions to cut costs, repair their balance sheets, and roll up smaller competitors, silica stocks have rebounded sharply in 2016. That rally might just be the beginning given that we have yet to see the impact of higher volumes that are projected to materialize when activity improves.