A solid rebound in the home improvement market is lifting results for both of the industry's biggest players right now. In addition, Home Depot (NYSE:HD) and Lowe's (NYSE:LOW) each project that these economic conditions will power years of strong sales and profit growth ahead.

Yet Home Depot has its smaller rival beat in many of the key metrics that investors care most about. 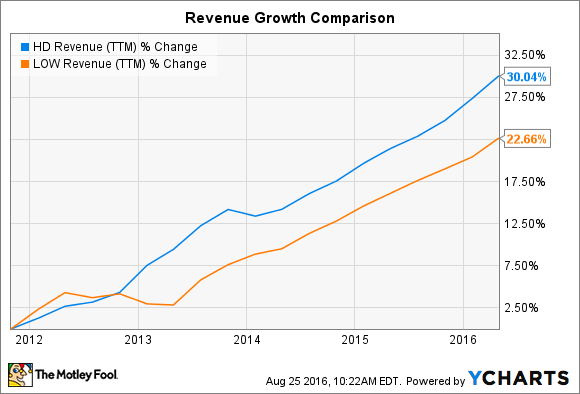 That success helps explain how Home Depot's total revenue growth is beating Lowe's over the last five years -- even though its store count isn't expanding nearly as quickly. The retailer is earning higher revenue the hard way: through increased customer traffic and higher average spending at its existing locations.

Both companies' earnings are trending solidly higher. Net income at Lowe's is up 14% over the past six months, while Home Depot's is up 11%. Zoom out, though, and you'll see that there's no contest between profitability at these two retailers. Since the housing market recovery began, Home Depot has more than doubled its net margin to 8% of sales, while Lowe's remains below 5%. 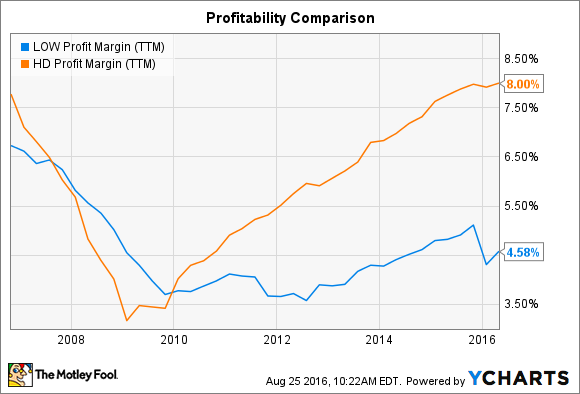 Home Depot's management is much more efficient with its cash allocation. Return on invested capital, at 26%, is twice Lowe's figure. Meanwhile, CEO Craig Menear and his executive team project that ROIC will hit 35% by fiscal 2018 -- right around the time that Home Depot is expected to cross $100 billion in annual sales. 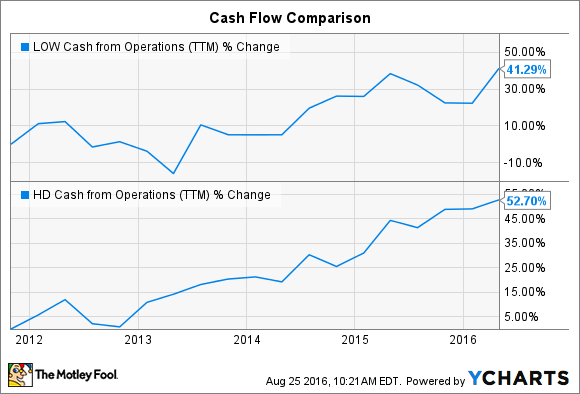 Cash flow is a closer call between these giants, yet Home Depot still comes out ahead. The company is producing close to $10 billion of free cash a year, up 53% since 2011, while Lowe's comparable metric has improved by 41% to reach $5.5 billion.

Income investors might prefer a Home Depot investment, thanks to the retailer's heftier dividend commitment. Management targets returning 50% of earnings each year to shareholders through quarterly dividends, while Lowe's promises just 35%. 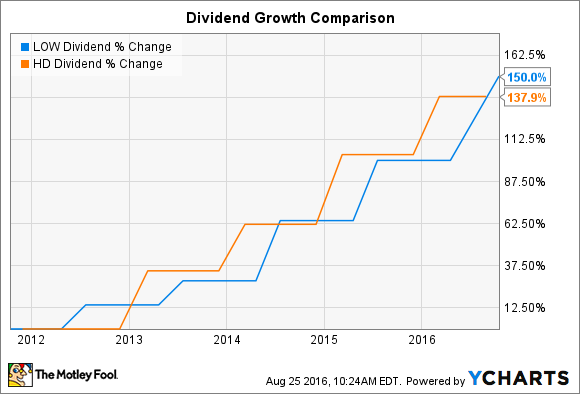 There's a drawback to that heftier payout, though. Home Depot had to forego several annual dividend increases during the worst of the housing market crisis, while Lowe's pushed its dividend slightly higher. Still, the housing giant remains a dividend powerhouse, even if it can't claim an unbroken streak of payout raises like Lowe's can.

Both companies are bullish on their prospects over the next few years. Lowe's told investors recently that a "favorable macroeconomic backdrop" should power strong sales and profit gains in the coming quarters. The company expects to manage 4% comps for the full year, just as they initially projected back in February.

Home Depot provided more detail on its thinking in a recent investor presentation that showed that spending on home improvement -- while up sharply since 2010 -- is still far below its long-term average. Other key metrics, including higher household formation, an aging stock of housing, and rising home prices, all currently point in the same direction, toward more growth in the industry.

As a result, Home Depot not only believes it will log another year of 5% comps and double-digit earnings growth in 2016, but it also sees a fundamentally stronger business forming over the next few years. Expansion deeper into the professional contractor and maintenance and repair segments should help. And so will Home Depot's market-thumping e-commerce gains. The online business grew 19% last quarter to 6% of sales. Those numbers should improve further as it rolls out delivery of e-commerce sales directly from its network of 2,000 stores.

Given those preferable financial and operating trends, I believe the slight premium that investors are being charged for Home Depot's stock (21 times expected earnings compared to 19 times for Lowe's) is well worth it.