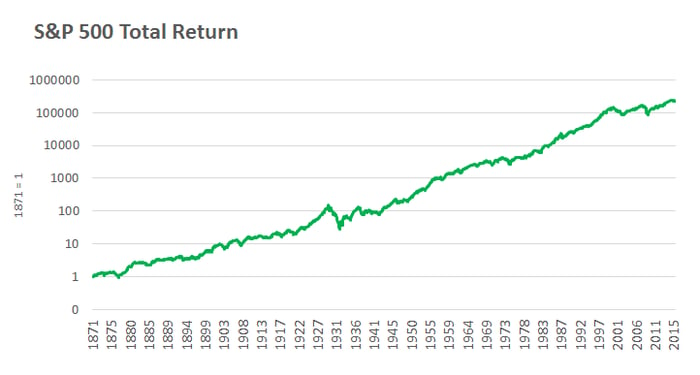 Nine years ago this week I was a private equity intern wondering if the 2007 credit crunch would hurt his employer. The answer was "yes." I quickly needed to find something else to do. A friend wrote for The Motley Fool and said I should look into it. I did, and it's been an amazing experience ever since.

Here are the most important things I learned in nine years.

Investment fees are falling. Investment costs are not. Index fund fees now round to zero. That's a big win for investors. But the emotional cost of investing is as high as it's ever been. The massive increase in financial media is great, but it has a downside: We are bombarded with more headlines than ever that feed on greed, fear, and doubt, making it easier than ever to get sidetracked into ruts of excitement, confusion, and pessimism. Everything that's valuable has a cost. The biggest cost in investing is the emotions of being uncomfortable, not knowing what the future will bring and wondering if you're doing the right thing. These costs are orders of magnitudes larger than fees paid to advisors, and their currency is stress hormones rather than dollars. A lot of investors realize they can't afford these costs, and quit. But paying them, for those who can, is as worthwhile as it's ever been.

Most investing success boils down to avoiding catastrophic mistakes. Few "good" decisions are needed to do well over time. This is a new development in the investing world. In the past, successful investing meant being on the inside, with access to the products and information required to do well. Today, every tool needed for success is available to every investor, no matter how small. Low-cost funds, news, disclosures, tracking software. They're all there for everyone to use. All you have to do is keep your head on straight and not screw it up. That's the only skill investing requires these days.

Most investing mistakes and frustrations come from trying to run a marathon in an hour. Diversified investing is so simple. Companies earn profits, and over a long period of time those profits accrue to shareholders. If you leave it at that – and you should – investing is such a basic game that doesn't require much action. But instead of letting profits accrue over time, a lot of the investment industry attempts to speed up the process by front-loading gains into shorter periods. This is done by guessing what other investors will do next and trying to get ahead of them. It's a billion times harder than true investing, and it's the cause of most investment mistakes. Alas, it's too potentially lucrative for many to pass up.

Progress happens too slowly to notice; setbacks happen too quickly to ignore. The market quickly lost 38% in 2008, and it was huge deal. Books were written about it, and Congressional hearings were held. We'll be talking about it for decades. The market then slowly tripled from 2009 to 2015, and barely anyone flinched. You had to sit down and show people the numbers to get them to believe you. This is common: Recessions take place over months; recoveries take place over years. It can takes decades for companies to become valuable, but bankruptcies happen overnight. Pain hurts more than the same level of gain feels good, but the duration differences between progress and setbacks helps explain why there are so many pessimists amid a backdrop of things getting better over time.

Few things are more valuable than room for error. Having a big gap between what could happen and what you need to have happen to meet your goals is priceless. Long-term success has more to do with the ability to constantly shrug your shoulders at the world's unpredictability than it does constantly being right.

"Don't do anything" is the best advice for most people most of the time, but it's not intellectually stimulating enough for many people to take seriously. Most fields have a positive correlation between effort and results. Investing is one of few where the correlation is negative, especially for amateurs. The higher your IQ is, the harder it is to accept this.

No one is smarter than the collective intelligence of millions of other investors. Some, however, are a little more patient and less emotional. That's where the potential for "edge" is found. Thirty years ago investing was mostly an analytical game, because information was scarce and computers weren't scouring the world for mispriced assets. That's changed. Most analytical opportunity has now been fully exploited. But there's still huge opportunity to gain an edge over most investors through patience and good behavior.

There has never been a better time to be an investor. Ever, in history. More people have access to first-class services than ever before. It's so important, and we don't spend enough time realizing how good it is.

Thanks for a great nine years.