For the most part, Kinder Morgan's (NYSE:KMI) financial results have been relatively stable compared to last year. In the first quarter, distributable cash flow was only down 0.7% year over year, with that decline widening slightly in the second quarter to 4.1%. That said, one of the reasons why its cash flow is down over last year is its weak carbon dioxide segment. That segment produces carbon dioxide that is then used to produce oil via enhanced oil recovery (EOR) by flooding legacy oil fields (owned by Kinder Morgan and third parties) with carbon dioxide to push out more oil. Given this segment's direct exposure to commodity prices, it is no surprise to see that it is weighing on results. However, low oil prices are only half of the story here.

Drilling down into the weak spot

As the chart below shows, Kinder Morgan's carbon dioxide business is noticeably weaker this year compared to its other four segments: 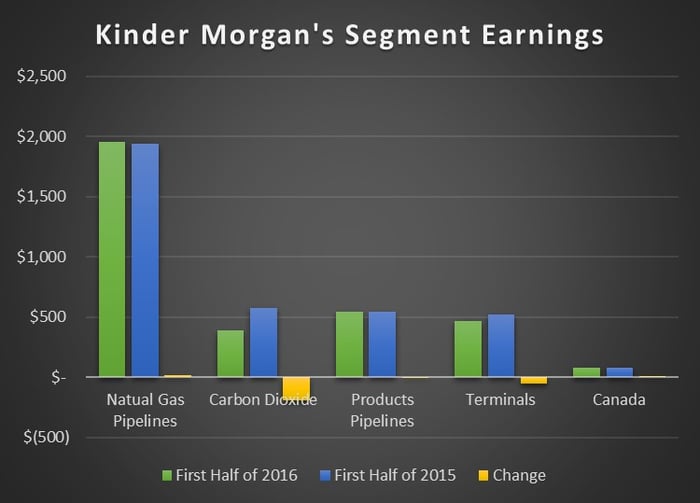 Overall, segment earnings are down 32% compared to the first half of last year. Weak oil prices are a significant contributor to this decline. In the first quarter, for example, its average realized oil price was $59.55 per barrel, compared to $72.62 in the first quarter of last year. The company's price realization improved a bit in the second quarter to $62.17 per barrel, though that was well below the $72.82 it captured in last year's second quarter. That said, its price realizations would have been much worse if it were not for Kinder Morgan's oil hedges, which are expected to provide a $265 million uplift to earnings this year.

The other factor driving down earnings is production volume, which is coming in weaker than expected. During the second quarter, oil production across the company's fields fell 9% compared to last year, due in part to anemic production at its SACROC field, which was below its plan. Meanwhile, carbon dioxide production was up 22% year over year in the second quarter, but that was also below expectations.

Kinder Morgan was not the only EOR producer struggling to meet its production targets. Denbury Resources (NYSE:DNR) is having a tough year. The company experienced two separate 100-year flood events at its Thompson Field, resulting in it delivering minimal production during the quarter, while rough weather also impacted production at its Conroe Field. That said, even after adjusting for the weather and an asset sale, Denbury Resources projects that its output will still be about 1,000 barrels of oil equivalent per day below its prior guidance.

As much as oil companies try to project production, it is an imperfect science. Because of that, volumes can come in above or below expectations depending on a range of factors. In Kinder Morgan's case, it is going up against a very successful drilling program in 2015. This year, however, its drilling candidates are not in the most prolific areas, which is causing weaker production results than anticipated.

Those poor results are coming at the wrong time. With oil near $50 a barrel, the company stands to realize more for its unhedged oil volumes than anticipated because it budgeted for $38 oil. Meanwhile, thanks to solid cost containment, production costs have come in lower than expected. Unfortunately, the company's less robust volumes are offsetting those higher prices and lower costs to such a degree that Kinder Morgan expects its carbon dioxide segment to stay within its plan for the year, which budgeted that segment earnings would be down 20% year over year.

Kinder Morgan expected that its carbon dioxide division would be weak this year because of persistently low oil prices. While prices remain low, they are above its initial expectations. Instead of benefiting from those higher oil prices, though, the company's volumes have come in less than expected, which is keeping this segment on pace to have a pretty lousy year.