This could open up an entirely new revenue stream for Tesla.

One of the biggest questions since Tesla Motors (TSLA 7.33%) unveiled its Model 3 in March has been how the electric-car maker would make customers pay for access to its robust Supercharger network. After all, the convenient long-distance travel enabled by these chargers, which can provide up to 170 miles of charge in 30 minutes, are one of the company's best perks for its vehicle fleet, compared with the charging options available for electric cars by other manufacturers.

But investors and customers may be getting a peek at Tesla's future monetization model for its Supercharger network. As Tesla's late-2017 timeframe for the first Model 3 deliveries appraoches, HTML code discovered on Tesla's website seems to preview one payment option for Model 3 Supercharging.

A close look at the HTML code on the My Tesla page for Model 3 reservation holders reveals a commented-out section of code referencing "Supercharger Credits," Teslarati pointed out on Tuesday.

"Commented code is generally a placeholder put in by developers for what's to come, though they're not ready to present it yet," writes Teslarati founder and chief editor Gene Liu, who also has a background in software. 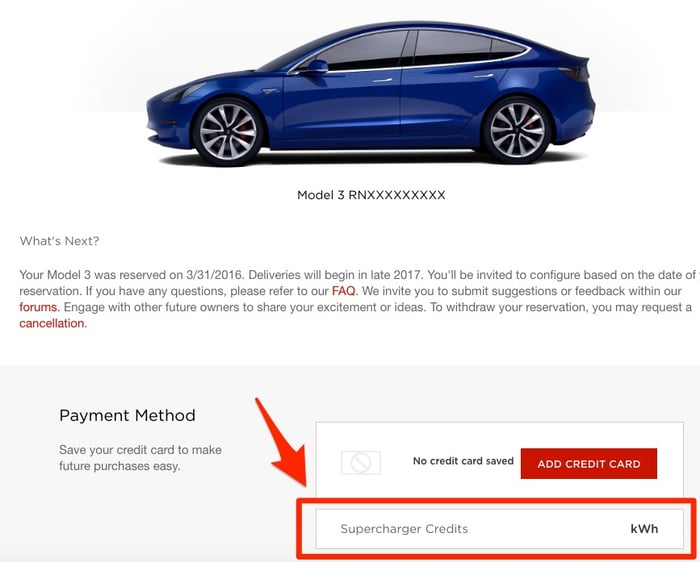 As the uncommented code reveals, Tesla is likely planning to offer a payment option for Model 3 owners to pre-pay for Supercharger Credits, measured by kilowatt hours of charging.

What else we know

Tesla CEO Elon Musk already said during in its annual shareholder meeting earlier this year that it didn't plan on including lifetime access to its Superchargers the way it currently does for its more expensive Model S and Model X. With a starting price at about half of its Model S and X, Musk said "the obvious thing to do is decouple [access to the Supercharger network] from the cost of Model 3." 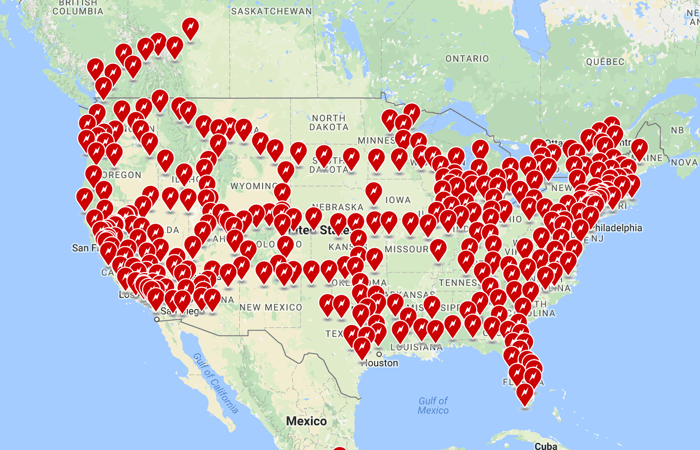 Beyond noting that Model 3 access to the Supercharger network wouldn't be included in the cost of the vehicle, Musk also shared a few other nuggets:

Two payment options: Tesla will offer both a pay-per-use option and a lifetime option. Musk gave this away when he said charging for long-distance travel would not be "free unless [Model 3 buyers] purchase that package."

"I wish we could [make Model 3 Supercharging free], but in order to achieve the economics, it has to be something like that," Musk said.

It will be cheap: While Tesla plans to charge money for Supercharging, the company is still careful to ensure it upholds its costs-saving value proposition for electric charging compared with gas.

"[I]t it will still be very cheap, and far cheaper than gasoline, to drive long-distance with the Model 3," Musk emphasized when he was talking about how the company would bill Model 3 buyers for Supercharging.

Evidence pointing to a likely debut of a pay-per-kWh model for Model 3 Supercharging is important news for investors. Not only would a pay-per-kWh model open up an entirely new revenue stream for Tesla, but it could also help the company recoup some of the margin lost on its lower-cost Model 3 compared with its fat margins on its Model S and X. Further, it also changes the dynamics of Tesla's open invitation to competition to use Superchargers as long as they pay their share of operating costs; Tesla would likely now almost certainly require competitors' vehicle owners to pay per use in the same manner Model 3 owners will.