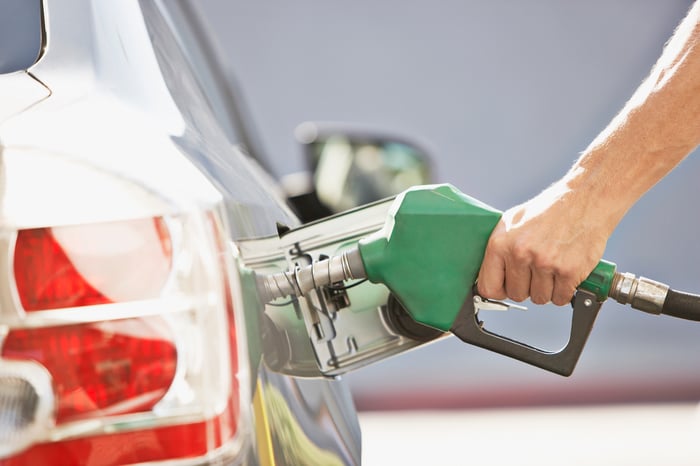 Costco Wholesale's (NASDAQ:COST) growth has slowed down from the market-thumping pace investors have come to expect from the warehouse retailer. Comps are up just 2% over the last three quarters, compared to a 4% increase in the prior-year period. In the key U.S. market, meanwhile, sales growth was flat last quarter.

A portion of that slowdown can be pegged to weaker overall customer traffic. After averaging 2% annual gains in 2008, the retailer's traffic growth spiked to over 4% for the past six fiscal years. Then the metric declined slightly to kick off 2016, to just 3.5%.

Yet the biggest drag on Costco's sales lately has been from its gasoline business, which has slumped as fuel prices declined. Last quarter, for example, a 20% decrease in average fuel prices pushed gasoline sales down by nearly $500 million.

The drop turned what would have been a 4% net sales boost into just a 2% increase. Still, Costco is happy to take the hit in this division, given the many benefits it has to its business.

Fuel sales are a major part of Costco's operations, responsible for nearly 10% of sales last year. The company booked over $10 billion of fuel revenue in fiscal 2015, with gasoline volume up 15% over the prior year.

Consistent with its approach toward selling groceries, television sets, and apparel, the warehouse giant aims to maximize fuel volume by offering the lowest possible price. It is consistently ranked among the cheapest -- if not the cheapest -- station in its area. A recent Gas Buddy survey found that Costco was the top value brand in the country, with prices that averaged nearly $0.20 per gallon below the national average.

The ability to achieve this competitive position, what executives call pricing authority, is the main reason why Costco is in the gas business, and it helps explain why management has expanded it to over two-thirds of its warehouse locations. Fuel sales also drive traffic into stores and help attract new members, many of whom can easily save enough money on gas alone to justify the annual subscriber fee.

Gas price swings have a mixed effect on Costco's finances. On the negative side, a sharp decline like we've seen this year will drive sales growth lower and push selling, general, and administrative (SG&A) expenses higher as a percentage of sales. On the plus side, gross margin is typically elevated in this scenario since Costco makes more profit on sales in its other business segments. 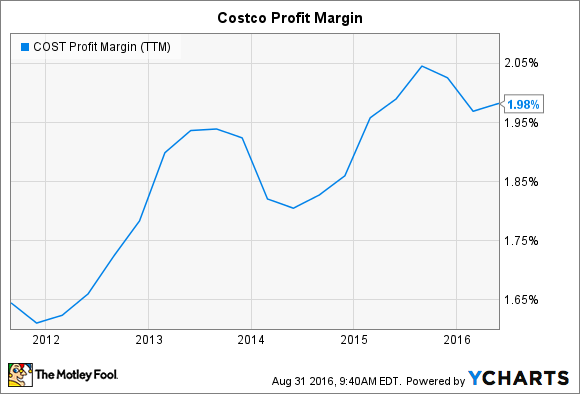 In fact, that's exactly the impact investors are witnessing with the business right now. Gross profit margin is up to 11.3% of sales in fiscal 2016 from 11.1% in the same period last year even as sales growth has slowed. SG&A costs are up by roughly the same margin as gross profit, rising to 10.4% of sales from 10.1% in fiscal 2015. Bottom-line profitability is down slightly, ticking lower to 1.9% of sales from 2%.

So the gas business is a net drag on Costco's operations right now, but that's not likely to convince management to scale back on its expansion or to raise prices at all. The situation is instead a good example of management's retailing strategy in action. "We do not focus in the short term on maximizing prices charged, but instead seek to maintain what we believe is a perception among our members of our 'pricing authority' -- consistently providing the most competitive values," executives explained in the 10-K report.

Taking that approach with gasoline means exposing investors to extra volatility around sales growth and profitability, but it also produces more satisfied members, which is Costco's overarching goal.