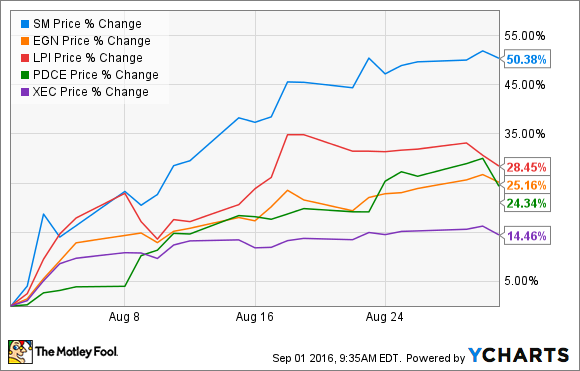 While rising oil prices certainly helped, given that crude ended the month 7.5% higher, it was far from the only catalyst driving these drillers higher, with acquisitions, analyst upgrades, and earnings also providing a big lift.

SM Energy delivered the best performance of the group after it announced a step-change acquisition, buying nearly 25,000 net acres in the Midland Basin for $980 million. That transaction almost doubled the company's footprint in that key oil basin. Analysts loved the move, with KeyBanc, Piper Jaffray, MUFJ, and Williams Capital all upgrading the company during the month of August. In addition to that key acquisition, SM Energy also reported surprisingly better-than-expected second-quarter results, reporting a net loss of $0.44 per share, which was $0.24 per share less than the consensus estimate.

PDC Energy also jumped after announcing a transformative acquisition, paying $1.5 billion to acquire 57,000 net acres in the Delaware Basin. That transaction marked its entry into that key oil basin, drawing the praise of analysts. Stephens upgraded the stock to overweight, while KeyBanc raised its price target from $72 to $76, and Williams Capital initiated it at a buy. Lost in the excitement of the transaction was PDC Energy's second-quarter results, highlighted by a 54% production increase. In addition, the company boosted its full-year production guidance while reducing its capital spending outlook.

While Laredo Petroleum did not buy any acreage last month, it did just spend $125 million to boost its Midland Basin acreage in July. Last month's buying spree in the basin certainly made its previous deal look even better. Analysts at Williams Capital, however, thought the stock has run up too far too fast, assigning it with a hold rating. Investors, though, had reason to be bullish on the stock after its reported second-quarter earnings of $0.13 per share, which was $0.03 per share ahead of the consensus estimate. Moreover, Laredo Petroleum joined PDC Energy in boosting its full-year production guidance by increasing it by 11% from its initial guidance.

Energen also did not have any significant acquisitions to announce last month, though the company did note in its second-quarter earnings report that it added 850 net acres in the Delaware Basin via a bolt-on transaction. That said, the bulk of its M&A last quarter was on the divestiture side -- it announced $551 million worth of non-core asset sales in July. However, that cash put Energen in the position to boost its capex budget to $450 million, from its prior range of $350 million to $400 million. Also, after exceeding the midpoint of its production guidance in the second quarter, Energen boosted its full-year production outlook by 2%. Analysts at Williams Capital liked what they saw, which is why they initiated Energen with a buy rating last month.

Cimarex Energy also didn't have any acquisition announcements last month. However, it traded higher along with its Permian Basin peers because their additions highlighted the value of its acreage in the basin. The company's drilling results during the second quarter certainly showed the value of its acreage -- it recently drilled several wells that delivered strong production rates. Those robust wells enabled Cimarex Energy to trounce analysts estimates last month, with the company reporting second-quarter earnings of $0.07 per share, which was $0.06 per share above the consensus. That said, analysts at Williams Capital rated the stock a hold, mainly due to valuation concerns.

The Permian Basin is the place to be these days. Thanks to its low costs and excellent production rates, drillers can still earn attractive returns in the current environment. That is why they are paying up to grab more land in the basin, setting them up for years of profitable drilling. That has analysts and investors excited about the future of drillers focused on this legacy oil basin.