Thanks to leaks from both PC Watchand DIGITIMES, we now know that microprocessor giant Intel (NASDAQ:INTC) is planning to do something interesting with the products that it plans to launch for the personal computer market.

Some background on Intel, manufacturing tech, and margins 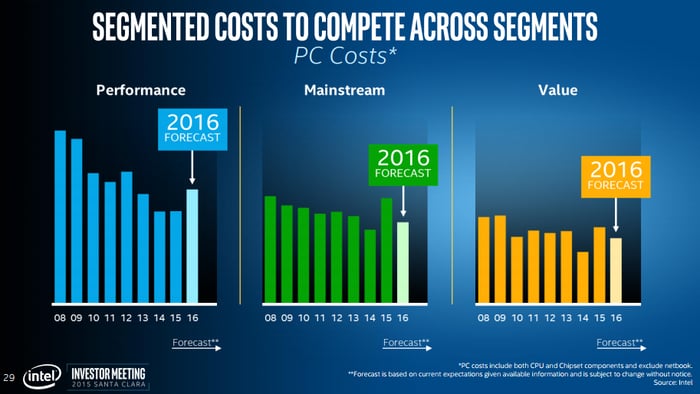 Notice in the slide that in the "mainstream" and "value" segments of the personal computer chip market, Intel saw its costs rise significantly from the very low levels seen in 2014? This was due to the fact that Intel largely transitioned these product families from older 22-nanometer manufacturing technology to newer 14-nanometer technology.

The "performance" segment actually saw costs remain flattish because the company didn't introduce desktop processors on 14-nanometer until the end of 2015; the company predicted that costs in this segment would surge in 2016 as product costs went up as a result of the 22-nanometer to 14-nanometer transition kicking in.

With this background in mind, we can understand Intel's strategy vis-a-vis Coffee Lake and Cannon Lake.

Partially offsetting the hit to mainstream by keeping performance 14-nanometer

Beginning in late 2017 and extending through 2018 (so this discussion is centered around 2018 margins), Intel's mainstream product line will likely wholesale transition from 14-nanometer to 10-nanometer. I suspect that this will lead to an increase in product costs (I'm assuming that Intel's 10-nanometer yields won't be great out of the gate), diluting gross profit margins.

In terms of the slide above, I would expect 2018 mainstream product costs to tick up fairly significantly from where they will be in 2017.

However, for the performance segment, I could see costs staying roughly flattish to 2017 levels (assuming that Coffee Lake doesn't add so much additional die area that it winds up ballooning product costs anyway).

It's not clear what Intel's plan for the "value" segment is just yet. This segment is largely addressed by the company's Atom-based products sold under the Pentium and Celeron branding. In early 2015 these products transitioned to 14-nanometer and Intel recently released a new, second-generation Atom architecture.

In this case, I would expect a negative impact to Intel's margins from that particular transition.

All told 2018 might be a year in which Intel sees product costs increase (negatively impacting gross profit margins to some degree) as a result of the 10-nanometer transition, but by keeping a large portion of its shipments on 14-nanometer, it can soften that blow quite a bit.