Shares of Abercrombie & Fitch Co. (ANF 1.75%) took a hit last month, finishing down 14% according to data from S&P Global Market Intelligence. The stock was actually climbing for most of the month until it fell on an underwhelming earnings report on August 30 that sent shares down 20%. 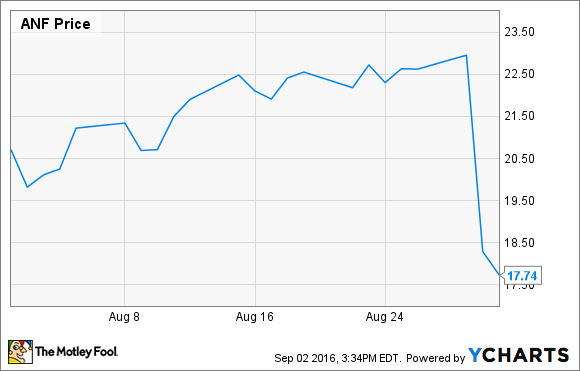 Like other mall-based retailers and teen-apparel vendors, Abercrombie & Fitch has been challenged lately, and has tried to revamp its brand, taking steps like removing the logo from much of its clothing and using less sexy advertising.

However, its second-quarter performance was another disappointment as comparable sales fell 4% overall and 7% at namesake Abercrombie stores. At Hollister, same-store sales were down 2%. Overall sales were down 4% to $783.2 million as management blamed poor traffic at flagship and tourist locations, a sign that a stronger dollar may be having a negative effect on tourist visits and spending. Gross margin fell 160 points, and on the bottom line the company posted an adjusted loss per share of $0.25, much worse than the $0.12 per-share profit a year ago.

Echoing his peers, CEO Arthur Martinez called the environment "challenging" as the stock fell to a post-recession low on the news. Management also forecasted a continuing decline through the year in comparable sales, saying they would remain challenged, especially in tourist and flagship locations. Analysts have projected a full-year profit, counting on a stronger second half of the year due to back-to-school and holiday shopping, but that may change after the company's recent report. Peers like American Apparel and Aeropostale have already declared bankruptcy, and the sector has yet to find a response to fast fashion retailers like H&M and Forever 21. Given these circumstances, it seems hard to justify a bet on Abercrombie.