Shares of fiber optic networking company Applied Optoelectronics (AAOI) jumped on Wednesday following a press release from the company, which raised guidance for the third quarter. At 11 a.m. EDT, the stock was up about 13%.

According to CEO Dr. Thompson Lin, Applied Optoelectronics experienced greater customer demand for its data center products during the third quarter, prompting it to raise its outlook. Revenue is now expected in the range of $63 million to $65 million, up from a previous range of $56 million to $59 million. During the third quarter of 2015, the company reported revenue of $57 million. While previous guidance called for flattish sales, the new guidance calls for double-digit growth.

Non-GAAP gross margin is expected to be in the range of 30.5% to 32%, unchanged from the company's previous outlook. Higher sales will lead to higher profits -- it now expected non-GAAP EPS between $0.26 and $0.29. Previously, it guided for a range of $0.16 to $0.21. Even with the guidance boost, Applied Optoelectronics still expects earnings to decline year over year. During the third quarter of 2015, non-GAAP EPS was $0.40. 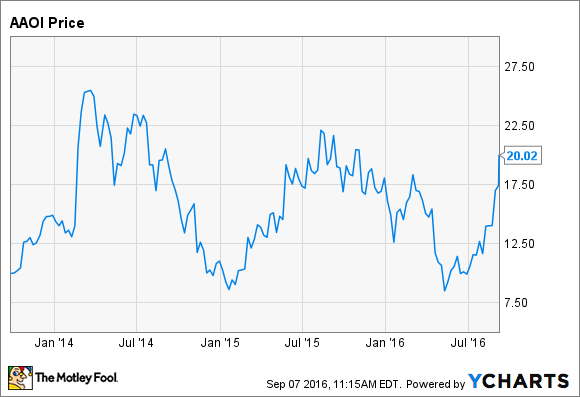 The significant boost in revenue and earnings guidance gave investors a reason to bid up the stock. Shares of Applied Optoelectronics have been volatile since the company went public in 2013, leading investors on a roller-coaster ride. It will need to maintain this momentum in order to prevent history from repeating itself.