These three stocks might not be household names, but they're cheap and growing fast, so they could make great long-term investments.

It's natural for investors to stick to they companies that they're already familiar with when searching for stock ideas. Famed investor Peter Lynch was an advocate of this approach, and it served him well during his tenure as a top mutual-fund manager. However, with the markets trading at frothy valuations, it can make sense to look at businesses that are not household names in order to find value.

To help identify these businesses, I ran a search for stocks that meet the following criteria:

Using this simple screen produced some great-looking cheap stocks that the market may be missing, so let's dive in to see if any could be worth buying.

The name Darden might not be familiar to you, but the odds are good that you've dined in one of the company's restaurants over the past year. Darden currently runs 1,500 restaurants that operate under seven brand names that you're undoubtedly familiar with, like Olive Garden, Longhorn Steakhouse, and The Capital Grille.

Since these brands have been around for years, you might assume that Darden is a no-growth business -- but that assumption would be wrong. A few years back an activist hedge fund called Starboard Value took an interest in the company and decided to shake things up in order to put the company back in growth mode. The hedge fund succeeded in revamping the board and pushing for cost-saving measures like simplifying menus in order to increase productivity and boost profits.

These measure appear to have worked. Darden has managed to best its EPS projections in each of the past four quarters, growing full-year adjusted EPS by 37% over the prior year.

Better still, the company is using its higher profitability to reward shareholders. The company just pushed through a 12% increase in its dividend, bringing the current yield up to 3.7%, and it has the green light to buy back $315 million worth of its own shares.

Currently Wall Street is projecting that Darden will grow its bottom line by more than 15% annually over the next five years, which is a solid rate for a company that's trading for about 15 times next year's earnings. Add in the big dividend, and I like this company's chance of rewarding long-term shareholders.

Yet again, "Skyworks" isn't much of a household name -- but I can almost guarantee that you're a consumer of one of this company's products. That's because Skyworks is a leading supplier of specialized semiconductor chips that power the smartphone industry. The company's products can be found in the Apple iPhone and Samsung Galaxy models.

Skyworks' revenue and profits have been propelled higher over the last few years thanks to the tremendous growth in smartphone sales, but recent weakness in the industry has caused the company's shares to take a step back. That's affording investors a nice chance to buy this market leader at a discount.

Normally I'd suggest avoiding an electronic component maker, but time has shown that Skyworks isn't just any old supplier. Skyworks' products are so complex and integral to the functioning of the final products that the company has been able to maintain its margins while simultaneously growing its top line, which is a remarkable achievement. 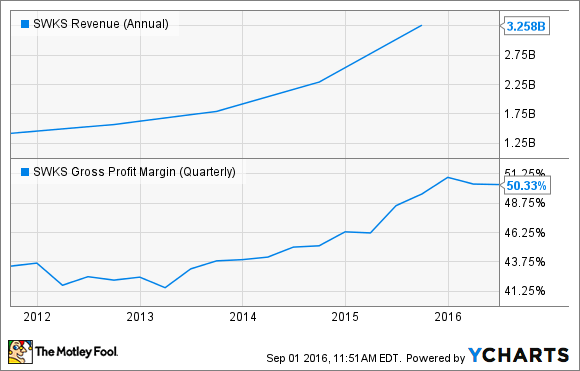 Thankfully, Skyworks isn't content to have its results depend so heavily on smartphone sales, which is why the company is entering new growth markets like industrial GPS tracking, wearables, smart TVs, and more. Analysts currently project that Skyworks' bottom line will grow by more than 15% annually over the next five years.

If you believe the company can meet or exceed those projections, then shares are looking quite cheap right now. Skyworks stock is trading for less than 12 times forward earnings and offers up a dividend of 1.5%. Those are enticing numbers that investors shouldn't ignore.

Roughly 10,000 baby boomers turn 65 every day, which is a great tailwind for healthcare companies everywhere. One smart way to play the trend is to buy shares of a pharmacy benefits manager, or PBM, which is a middleman company with huge purchasing power that negotiates better deals on pharmaceuticals than individual companies can get on their own.

The largest PBM in the U.S. today is Express Scripts Holdings, and thanks to a combination of increased political attention, a general swoon in healthcare stock valuations, and a dispute with the company's largest customer, shares can be purchased on the cheap today. 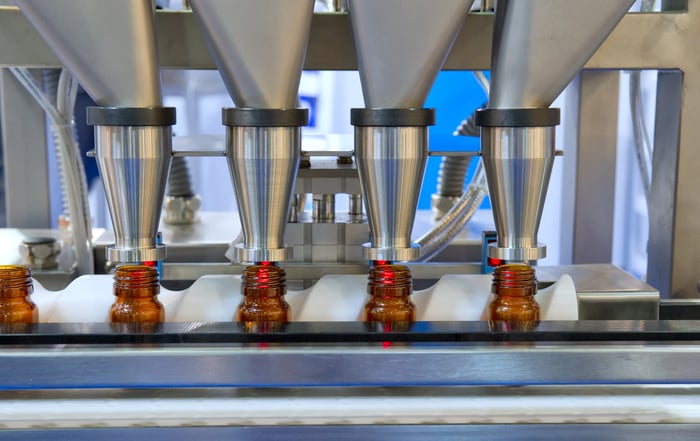 Let's take a closer look at the market's biggest concern right now. Anthem is suing Express Scripts for $3 billion in an effort to reclaim cost savings that it feels it is owed. While I don't have any particular insight into the situation beyond publicly available information, I think the two companies will come to terms prior to their contract expiration in 2019. Given that Express Script has an overall customer retention rate north of 96%, I like its chances.

Still, that worry has pushed shares so low that they are trading for less than 11 times next year's earnings -- quite a bargain for a company that is projected to grow its bottom line in excess of 15% annually over the next five years. Purchasing shares today while there is still uncertainty in the air might not be such a bad move.