A company not even involved in the potential merger discussions rose, too, but there's a good reason for that. 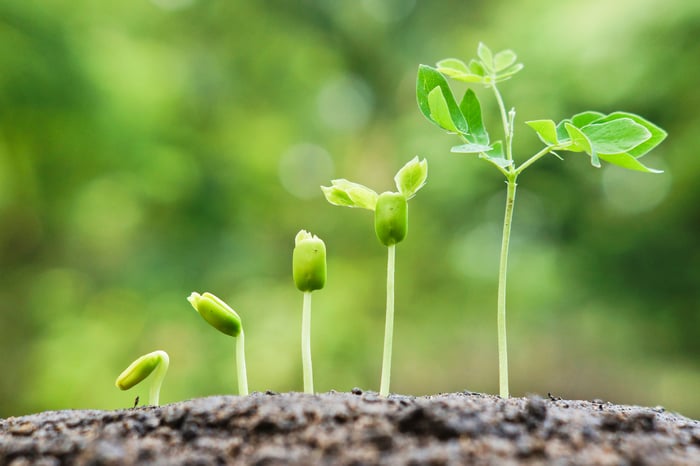 Shares of fertilizer powerhouse Potash Corp (POT) rose 18.2% in August after it confirmed rumors that it was in discussions with fellow fertilizer manufacturer Agrium (NYSE: AGU) about a potential "merger of equals." The news also spurred shares of The Mosaic Company (MOS -1.92%) 12.9% higher for the month, although Agrium stock only rose 7%.

Each of the three major agricultural nutrients -- nitrogen, phosphate, and potash -- are trading near multiyear lows thanks to a supply glut and slumping commodity prices. The industry has been reeling for nearly two years now, although management at each major producer have confessed that a turnaround in prices may be on the horizon. That could begin to occur by the end of this year or early 2017, with more meaningful price increases in 2018.

No matter when prices recover, combining forces could be a smart way to play a globally important market stuck in a rut of historic proportions. A potential merger between Potash and Agrium could provide more bargaining power in trade discussions and better insulate investors against current and future volatility, especially if synergies result in reduced expenses. It would also create a company with a roughly $30 billion market cap and over $21 billion in annual sales, each of which could go much higher when fertilizer prices recover. 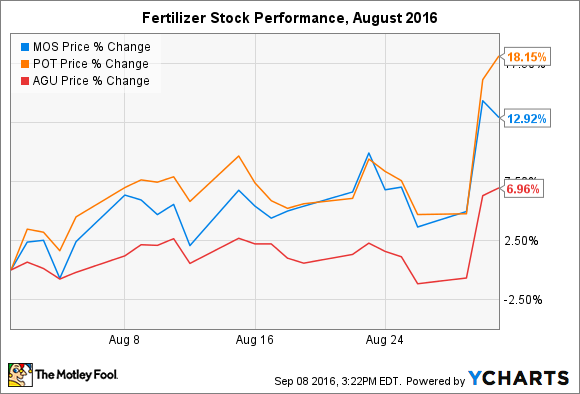 So, why would The Mosaic Company rise with Potash Corp and Agrium if it isn't involved in the deal? Investors could be thinking that The Mosaic Company is next on the list for industry consolidation considerations. It has a diverse business that stretches beyond fertilizers and trades at a $10 billion market cap -- a discount to that of either peer mentioned above.

That may or not be a great (or sustainable) reason for the company's stock to rise, but investors should also consider one important fact: The Mosaic Company is one of three partners in the Canadian fertilizer cartel Canpotex alongside, you guessed it, Potash Corp and Agrium. In fact, The Mosaic Company owns 39.1% of Canpotex's international sales, which amounted to roughly 40% of the company's total sales in 2015. Therefore, if its two Canpotex partners merge and gain extra bargaining power in trade negotiations, it could stand to benefit in significant ways as well.

Investors looking to fertilizer stocks for higher-than-average dividend yields may have additional reasons for optimism. In addition to reassurances that better days are (finally) ahead, a potential merger between Potash Corp and Agrium could setup a roaring comeback for North American producers. That also includes Canpotex partner The Mosaic Company, even if the company's own move higher last month appears easy to write off as an overreaction at first glance.