Here's one move that should have HCP's shareholders cheering.

In February, HCP (PEAK -1.10%) reported a loss for the fourth quarter of 2015 due to dismal performance within its HCR ManorCare portfolio of skilled-nursing and acute-care properties. Despite a 28% drop in the stock following this announcement, HCP has clawed its way back and more, thanks to a favorable market for REITs, and one savvy decision to split off the troubled assets. 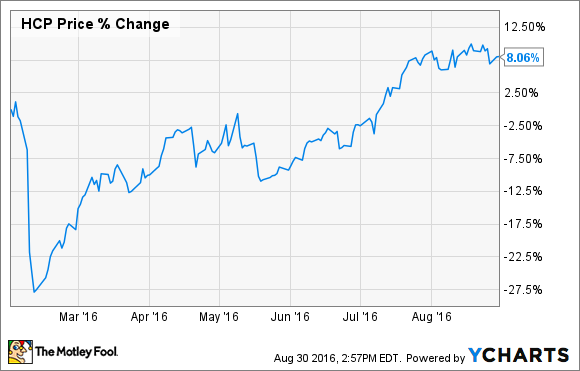 What happened with HCR ManorCare?

To make a long story short, HCP posted a loss for the fourth quarter of 2015 due to its HCR ManorCare post-acute/skilled nursing properties. To be fair, there was a tough environment for these property types industrywide, not just within HCR ManorCare. There were ongoing changes in reimbursement models, the unfortunate effects of which were reduced rates and shorter lengths of stay.

HCR ManorCare reported earnings before interest, taxes, depreciation, amortization, and restructuring or rent costs (EBITDAR) of $110 million for the fourth quarter, a $36 million drop from the previous year, which management called "below expectations and uncharacteristic." The primary reason for the miss was the continued transition from Medicare payers to Managed Care plans, which caused the company's census during the fourth quarter to drop 175 basis points, to 82.6%.

Furthermore, the company's fixed-charge coverage dropped to 0.97 times for the last six months of 2015, which meant that HCR ManorCare wasn't even bringing in enough money to pay its obligations.

Since then, the situation at HCR ManorCare has improved somewhat. EBITDAR has normalized -- $131 million in the first quarter of 2016, and $132 million in the second. And the fixed-charge coverage of 1.07 times, while not stellar, is enough to meet current obligations.

The spinoff: Making the best out of a bad situation

At the same time HCP reported solid first-quarter 2016 earnings, the company announced its plans to spin off its HCR ManorCare portfolio and other skilled-nursing facilities into a newly created REIT, which we have since learned will be named QCP, Inc.

In short, the idea is that this will achieve two main goals. First, it will remove the troubled assets from HCP's portfolio, leaving a remaining portfolio of assets that is stable and predictable, thereby improving the quality and financial flexibility of the company. The post-spinoff portfolio will be composed of senior housing, life science, and medical office properties, 95% of which are private pay -- a much more stable source of revenue.

Second, it will give QCP's management team the ability to focus solely on maximizing the value of the post-acute and skilled-nursing assets, and will allow the company to pursue strategies that were either impossible or impractical while still a part of HCP.

There are some additional details that we're not sure about, such as the post-spinoff dividend policies, but overall, this looks like an extremely smart move. It takes one unfocused company and turns it into two, each with a narrowly defined focus. HCP's shareholders will get the quality and consistency they expect from a high-quality portfolio, and QCP's investors may experience a little more volatility, but at least it will be expected from the start.

It's not a win just yet, but it should be soon

To be clear, this won't truly be a win for shareholders until the spinoff has been completed, and both companies have had some time to get used to operating independently. However, it's a win for HCP's shareholders in the sense that management was able to take a negative situation, and set in motion a plan to not only fix the problem, but also to maximize value for shareholders.

Matthew Frankel owns shares of HCP. The Motley Fool has no position in any of the stocks mentioned. Try any of our Foolish newsletter services free for 30 days. We Fools may not all hold the same opinions, but we all believe that considering a diverse range of insights makes us better investors. The Motley Fool has a disclosure policy.