Please ensure Javascript is enabled for purposes of website accessibility
Log In Help Join The Motley Fool
Free Article Join Over 1 Million Premium Members And Get More In-Depth Stock Guidance and Research
By Cory Renauer – Sep 9, 2016 at 11:03AM

Shares of MannKind Corp. (MNKD 1.81%) a biopharmaceutical company focused on diabetes care, fell 19.1% in August, according to data from S&P Global Market Intelligence. Its effort to relaunch its only FDA-approved product, the inhalable insulin Afrezza, isn't progressing fast enough to inspire investors, although an attempt to capitalize on Mylan's EpiPen controversy perked things up to finish the month. 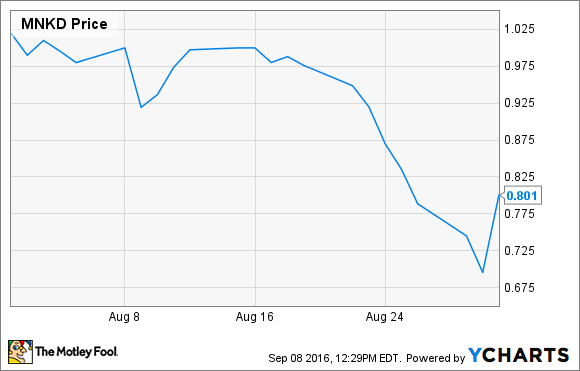 During MannKind's second-quarter earnings call, management discussed a number of initiatives that may have helped during Afrezza's initial launch under its former partnership with Sanofi. Unfortunately, the only thing investors were looking for was exponential growth in new prescriptions.

Sadly, that was not what the company delivered. Chief Commercial Officer Michael Castagna mentioned over 300 sample requests during the first two weeks of its sample program. He also mentioned that new prescriptions rose from roughly 84 a week to 116 a week during the first few weeks of the relaunch.

Seeing new scripts rise rather than fall is nice, but that pace hardly suggests the company will be able to produce enough revenue to significantly extend its cash runway, nor shore up its frightening balance sheet. Without some rapid sales growth, there was little enthusiasm for the stock. An update on the front page of the company's website citing a lapse in Medicare and Medicaid coverage for Afrezza due to slower than expected national drug code adjustments didn't help.

MannKind's stock perked up at the end of the month after it announced plans to produce an alternative to Mylan's increasingly expensive EpiPen. It didn't take long for investors to realize it hardly has the resources to commercialize its only approved product, and that stock pop fizzled out.

MannKind's Afrezza is delivered through the palm-sized Dreamboat inhaler, which has already earned approval. There may be a shred of hope that a low-cost epinephrine inhalant could entice an acquisitive company, but the odds against it are extremely long.

MannKind finished June with $63.73 million in cash and equivalents. Its operations burned through $19.12 million in the second quarter, which is awfully efficient (or inadequate) for a company beginning a drug launch in the extremely crowded diabetes care field. Servicing a heavy debt load and other expenses, though, raised its cash burn to $29.96 for the three month period.

Further financing options are most likely limited to dilutive share offerings, but even that door might close. Nasdaq's exchange listing requirements include maintaining a stock price above $1.00 per share, a level MannKind stock isn't meeting currently. If it doesn't rise soon, or complete a reverse split, eventual delisting is a real possibility.

Prescription trends might be moving in the right direction, but until they gain enough speed to achieve liftoff, I wouldn't touch this stock with a rented barge pole.

The Motley Fool recommends Mylan. We Fools may not all hold the same opinions, but we all believe that considering a diverse range of insights makes us better investors. The Motley Fool has a disclosure policy.