Shake Shack Inc. (SHAK 1.32%) shares were looking overcooked last month as the better-burger slinger coughed up 12% of its value according to data from S&P Global Market Intelligence. The high-priced stock sold off after reporting second-quarter earnings that included cooling same-store sales growth. 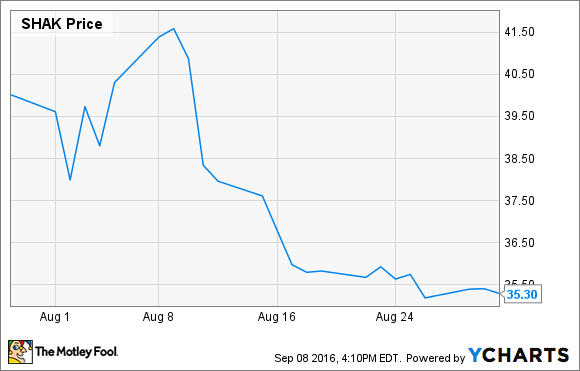 After fluctuating with the results from other restaurants in the first week of the month, Shake Shack shares took a dive on Aug. 11, falling 7% after it reported earnings.

Under normal standards, it delivered a solid quarter, but this is a company with a P/E ratio pushing triple digits, and investors have come to expect perfection. The market was disappointed that comparable sales growth slowed from 9.9% in the first quarter to a more mortal 4.5% clip, though that came as murmurs of a "restaurant recession" swept the industry with nearly every fast food chain posting disappointing comps last quarter.

Aside from same-store sales, there was really nothing to complain about as earnings per share of $0.14 topped estimates by a penny and the company lifted guidance for the year on revenue and store openings.

The company plans to open 18 domestic company-operated stores this year, up from an earlier estimate of 16, and expects to add at least 18 stores a year from here on. It also boosted its full-year revenue forecast from $245 million to $249 million up to a range of $253 million to $256 million, equivalent to approximately a 33% increase over last year.

The stock may continue to be challenged over the coming months due to valuation concerns, but the long-term story is very much in tact here. Management is executing almost perfectly, and the acceleration of store openings is a promising sign. As the stock grows into its valuation over the next year or two, I'd expect shares to steadily climb higher.

Jeremy Bowman owns shares of Shake Shack. The Motley Fool has no position in any of the stocks mentioned. We Fools may not all hold the same opinions, but we all believe that considering a diverse range of insights makes us better investors. The Motley Fool has a disclosure policy.