The fast-food chain surged on strong earnings growth in its quarterly report.

Shares of fast-food chain Jack in the Box Inc. (JACK -1.01%) bounced back last month, gaining 13% according to data from S&P Global Market Intelligence. The stock rose on a better-than-expected third-quarter earnings report at the beginning of the month as the chart below shows. 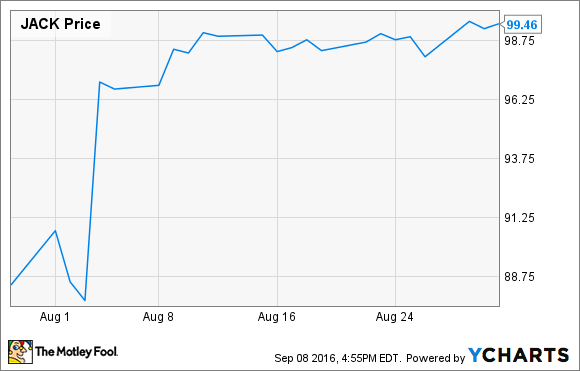 During a period when some rivals were plagued by a so-called "restaurant recession," Jack in the Box delivered impressive earnings growth with adjusted per-share earnings improving from $0.76 the year before to $1.07, well ahead of estimates of $0.87. Efforts to reduce general and administrative costs paid off with that expense dropping 16% even as revenue grew.

Same-store sales growth was modest, however, with Jack in the Box comps up 1.1% at Qdoba's slightly higher at 0.6%. Still, after complaining that McDonald's all-day breakfast launch had dented sales earlier in the year, CEO Lenny Comma said he was pleased that Jack in the Box "closed the gap" with the industry in the quarter.

For the current quarter, the final one of the fiscal year, management sees comparable sales growth of 1%-2% at both of its restaurant chains. Comps have slowed sharply from the prior year due to food deflation that is making it cheaper to shop at grocery stores instead of restaurants, though lower commodity costs are also helping Jack in the Box's bottom line.

For the full year, it expects EPS to increase from $3.00 in 2015 to $3.65-$3.75. With the savings from SG&A expenses, that EPS growth is impressive, but without increased comparable sales growth, that pace will slow next year. At a P/E of 30, Jack in the Box looks fairly valued.