Shares of SodaStream International Ltd. (NASDAQ:SODA) were looking effervescent last month as the stock jumped 18%, according to data from S&P Global Market Intelligence. As the chart below shows, the gains came primarily at the beginning of August, after the company posted a strong second-quarter earnings report. 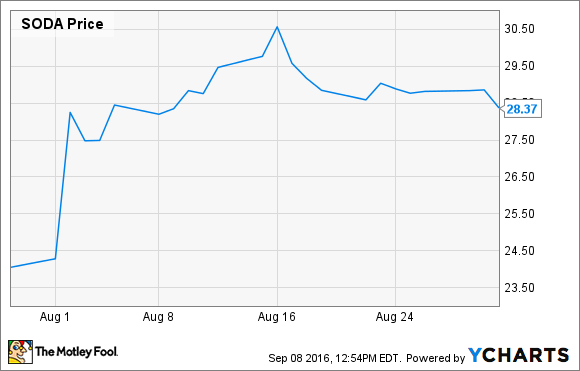 After an ugly 2015 for the DIY soda-maker, things seem to be moving in the right direction thanks to its rebranding as a sparkling water company, opening a new, more efficient manufacturing facility, and fixing inventory issues that had plagued it last year. Revenue increased 17% to $119.2 million, but that drove an outsize gain on the bottom line as earnings per share jumped 118% from $0.17 to $0.37.

During Q2, SodaStream set a record for gas-canister refills in a quarter at 7.5 million, a sign that the sparkling water pivot is working. Starter kit sales were also up 31%, showing that the company is still attracting new customers and that its marketing efforts are paying off. CEO Daniel Birnbaum said the results show that the company's strategic repositioning was the correct move.

SodaStream may never be the breakthrough product in the U.S. that the company and investors hoped it would a few years ago, but that doesn't mean it won't be relevant. Its collapse last year in the U.S. garnered a lot of attention, but the company is now gaining ground around the world with double-digit revenue growth in all four of its regions last quarter. Western Europe remains its biggest market, accounting for more than half of the company's sales.

I'd expect the upward trend to continue thanks to the recent rebranding, as the company's sparkling water systems are economical, environmental, and convenient.