Brinker International (NYSE:EAT) stock enjoyed significant gains last month, finishing August up 14%, according to data from S&P Global Market Intelligence. The stock got a jolt from a better-than-expected earnings report in the middle of the month as you can see in the chart below. 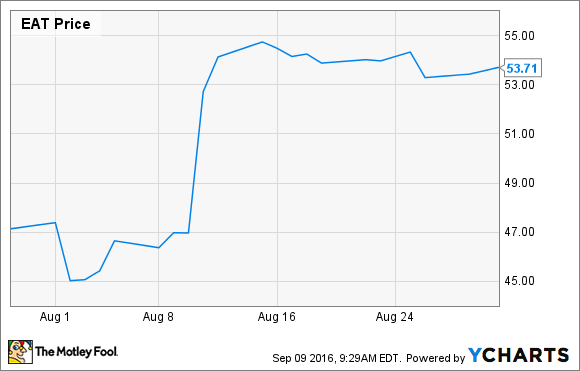 Like much of the restaurant industry, Brinker saw slow sales growth in the quarter due in part to a "restaurant recession" that has pushed consumer dollars away from restaurants and into the grocery channel. Comparable sales actually fell 1.8% at company-owned Chili's and 1.7% at Maggiano's, Brinker's smaller Italian-themed chain. At franchised Chili's locations, the slide was even worse at 3.4%.

The market, however, overlooked the poor comparable sales performance as adjusted earnings per share jumped 32%, driven by the company's decision earlier this year to acquire 103 restaurants from a franchisee and an extra week in the quarterly calendar. Revenue for the quarter was also up 15.4% to $881.7 million, and an aggressive share buyback program also reduced shares outstanding by nearly 10%, helping to lift results. CEO Wyman Roberts noted the company had returned to gaining share in the industry and that he was encouraged by early trends in fiscal 2017.

Looking ahead, the company sees overall revenue essentially flat as it loses a week in the fiscal year and comparable sales up by 0.5% to 2%. On the bottom line, management expects earnings of $3.40 to $3.50 per share, up from $3.09 as Brinker has been able to squeeze additional revenue from franchisees through new initiatives like tabletop ordering and new retail food offers, while buybacks continue to reduce the share count.

I wouldn't expect last quarter's earnings growth to continue, but the company's formula of share buybacks and international expansion has generated steady profits, and earnings growth of 10% to 14% this year is respectable. If Brinker can deliver on that, the stock could edge higher.