Investing in Calumet Specialty Products Partners (NASDAQ:CLMT) over the past year hasn't exactly been the most profitable venture. The company has been forced to suspend its payout to shareholders and is still taking on debt to cover its operating budget. These factors, as well as declining refining margins for the whole industry, have really put the hurt on Calumet's shares. 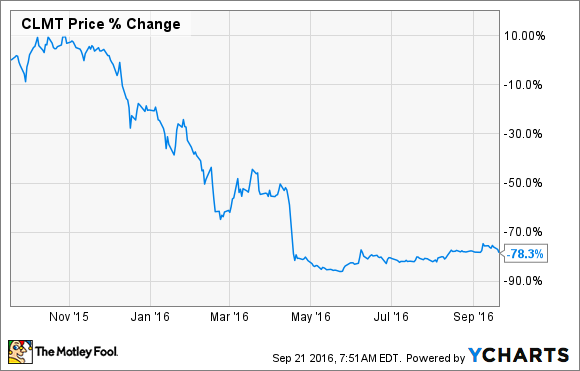 Clearly there are some issues that Calumet's management needs to address before investors should seriously consider this stock. That being said, these three things: a refocusing on its specialty products business, getting its balance sheet under control, and getting back to paying shareholders, could lead to some significant gains in the company's stock.

Despite all of the problems that Calumet has had in recent years, there is one thing that should give investors hope. Buried deep under all of those losses and debt issues is a stable business that generates decent returns: Its specialty products segment. These non-fuel petroleum products not only have much more stable margins than the more conventional gasoline and diesel, but it is a much less volatile market that lends itself well to a company that wants to generate steady cash flows to support a dividend.

Trouble is, that business has to make up for the issues at Calumet's fuels and oilfield services businesses. Its fuels segment is pretty boom or bust, but it tends to more frequently be a bust because Calumet's smaller refineries don't have the economics of scale that many other refiners have. Most of these unprofitable business ventures were added to the business between 2011 and 2014 when management went on a spending binge, but today those investments are more of a hindrance than a helper.

If the company could rid itself of these unprofitable businesses and get back to being a specialty petroleum product supplier it would certainly make the business a more profitable company in the long run.

The other big hindrance to Calumet's shares is the massive debt balance it carries. At the end of last quarter, Calumet's debt to EBITDA balance was an almost absurd 11.7 times. What's even worse is that much of that debt comes at a very high cost. It's most recent debt offering came with an 11% coupon rate. Even the most well run, high margin businesses would struggle to generate profits when making interest payments on rates that high.

The only hope of Calumet returning to profitability for shareholders is if the company can get out from underneath this onerous debt load. There are a couple ways to do this. One would be to raise capital through equity, but that isn't a very attractive option today because shares are priced so low and it would require massive shareholder dilution to raise enough cash. The other would be to sell off some of its non-core businesses like its traditional fuels refineries and its oilfield services business.

Chances are that the amount Calumet can sell these assets for is going to be much less than what it bought them for just a couple years ago, but it's looking like that is one of the only viable ways to bring some semblance of normalcy to the balance sheet. If it could get its debt levels to a more palatable level, then it might give investors some confidence that the company isn't a couple days away from insolvency.

I should be clear that paying a distribution to shareholders again will only be attractive after the company does the two things above. Paying shareholders before revamping itself as a stable cash generator and bringing down its debt load is a very bad idea.

That being said, Calumet Specialty Products Partners is set up as a master limited partnership, and a major reason for owning shares in a company that has this kind of corporate structure is to reap the benefits of tax-advantaged cash distributions to investors. Without these distributions, it is just an investment that requires a bunch of extra paperwork come tax time without any of the advantages.  Wall Street would likely welcome a well timed return of a payout with open arms, and would almost certainly lead to higher stock prices.

It will likely take a long time for Calumet's management to sort out its issues, but CEO Timothy Go has laid out a plan that could work if it's well executed and a few things swing in Calumet's favor. Until investors see a more focused, efficient business with a much lower debt burden, they should stay away. If it can achieve these things and get back to paying shareholders a reasonable distribution, though, then shares should rise significantly and might make this company worth another look.