The marijuana-drug company has had quite the year.

GW Pharmaceuticals (GWPH) has come a long ways since gaining EU approval for Sativex, which treats muscle spasms in multiple sclerosis patients, but has been commercially disappointing with sales that would be a rounding error for many large biotechs. Here are five charts that show the current state of the biotech focused on making drugs from marijuana.

1. A rising stock price (by any way possible) 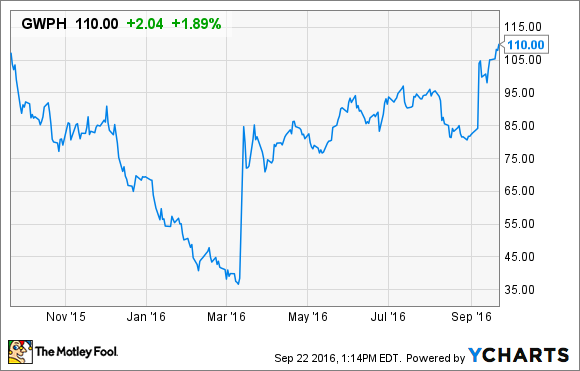 Like most biotechs, GW Phrmaceuticals had a rough second half of 2015 that continued into 2016 as investors left the sector for safer pastures. But GW Pharmaceuticals has been able to turn things around with a couple of nice spikes.

In March, the company reported positive data for its marijuana-derived drug, Epidiolex, in children with Dravet syndrome, a form of childhood epilepsy that's hard to treat.

And this month, GW Phamraceuitcals jumped again on word that the company might be up for sale. 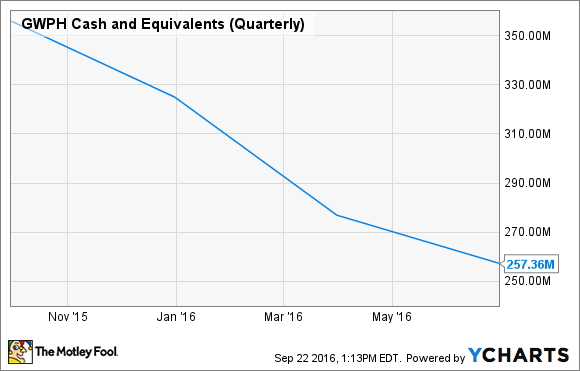 Drug development isn't cheap, and GW Pharmaceuticals has been burning through cash quickly. Fortunately the chart above doesn't tell the full story as the company raised $273 million in July, which won't show up on the official balance sheet until it reports its fiscal fourth quarter earnings. With the proceeds from the secondary offering, GW Pharmaceuticals looks like it's in good shape to get its marketing application for Epidiolex submitted next year.

Those data are from 2010, but not much has changed. Even today, 30% of epileptics are pharmacoresistant, meaning they still have seizures despite trying multiple medications. Obviously, developing drugs as a first-line therapy offers the largest opportunity, but GW Pharmaceuticals estimates there are about 140,000 patients in the U.S. that fit into the final-stage category, where the unmet need can justify higher pricing that can make up for the smaller market size. 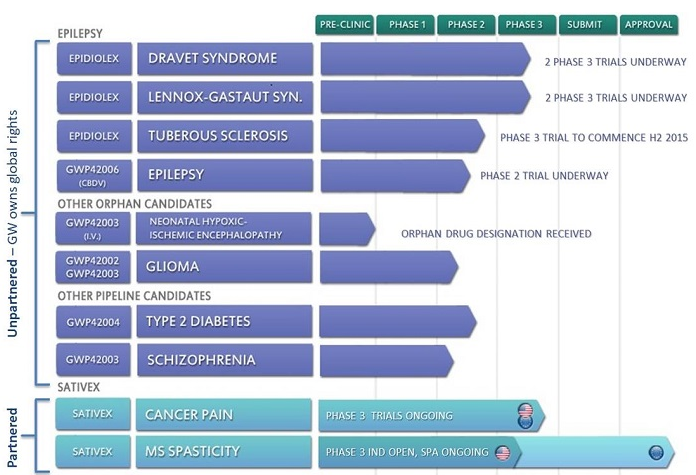 With multiple indications in later stages of development, most of GW Pharmaceuticals value is tied to Epidiolex, but the biotech does have other drugs in development.

GW Pharmaceuticals' GWP42006, which has a similar structure to Epidiolex, is currently in a phase 2 trial in epileptics. The biotech also plans to test GWP42006 in patients with autism spectrum disorders.

Dravet Syndrome and Lennox-Gastaut Syndrome are two hard-to-treat forms of childhood epilepsy, but Epidolex was able to reduce seizure frequency in both diseases compared to a placebo. The company is running another phase 3 trial in each of the indications. Assuming one or both of the clinical trials are positive, GW Pharmaceuticals will apply for a marketing application with the FDA next year.

While there have been rumors that GW Pharmaceuticals is a buyout candidate -- and there have certainly been a lot of acquisitions in the sector lately -- it's ill-advised for investors to use that as their sole investment thesis. Fortunately, GW Pharmaceuticals has made substantial progress over the last year, making it worth considering as an investment even if the buyout doesn't happen.