The global infrastructure giant is having a great year thanks in part to this key segment.

Brookfield Infrastructure Partners (BIP -0.33%) is enjoying an excellent year. The company's unit price is up roughly 35% year to date, vastly outpacing the market's 6.5% return. Driving that outperformance is the solid performance across most of the company's business segments, which in aggregate fueled a 12% increase in funds from operations (FFO) per unit. That said, one segment stands above the rest as its best one so far.

A closer look at the leader

As the following chart shows, FFO in three of Brookfield Infrastructure Partners' four segments is up this year: 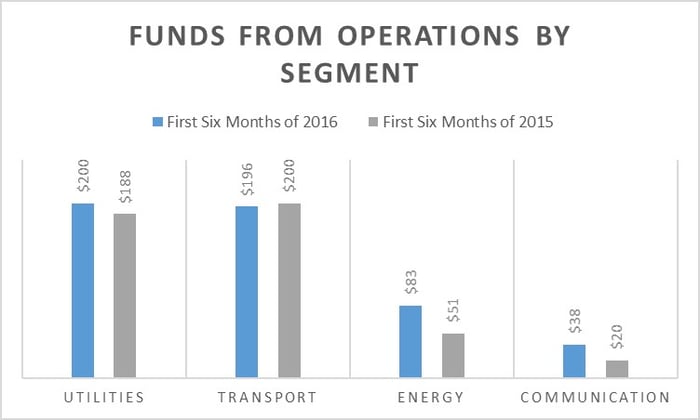 That said, the energy segment is by far the biggest contributor to growth. Not only did it deliver a remarkable 63% FFO growth rate, but its $32 million improvement is the largest absolute contributor to FFO growth. The primary driver of this growth is the company's increased stake in its North American natural gas transmission business, Natural Gas Pipeline Company of America (NGPL). That is after Brookfield Infrastructure Partners and natural gas pipeline giant Kinder Morgan (KMI -0.33%) teamed up to boost both of their respective stakes in the pipeline company to 50%.

In Brookfield Infrastructure Partners' case, it raised its stake in NGPL from 27% to 50%, which entitled it to a larger share of that pipeline's earnings. At that same time, NGPL's underlying operations are improving thanks to recent expansion projects. Last quarter, for example, Kinder Morgan noted that its natural gas pipeline earnings rose due in part to "higher throughput on NGPL due to deliveries to Sabine Pass LNG facility and to South Texas to meet demand from Mexico."

The other driver of Brookfield's energy earnings is its district energy business, which are centralized heating and cooling systems for several buildings. This is because the company has been steadily growing that business via roll-up acquisitions as well as adding additional customers to its systems.

Can energy continue to power earnings growth in the future?

Brookfield Infrastructure Partners' energy business should continue to drive earnings growth for the balance of the year, with NGPL leading the way due in part to recent expansion projects placed into service. Further, Brookfield and Kinder Morgan are currently constructing the Chicago Market Expansion project, which is a $81 million investment expected to go into service in the fourth quarter.

Also, Brookfield Infrastructure Partners recently closed the acquisition of Niska Gas Storage. In doing so, it doubled its natural gas storage capacity, turning it into one of the largest independent owners and operators of gas storage in the country.

Looking out over the longer term, Brookfield Infrastructure Partners currently has $145 million in natural gas pipeline projects under way, which are expected to drive 14% compound annual growth in earnings from its pipeline and storage assets over the next five years. Meanwhile, the company has $70 million in district energy investments under way, which should drive 11% compound annual earnings growth from those assets over the same time frame.

That said, as much growth as is in the pipeline for the energy segment, it is the company's utilities segment that should drive earnings growth in 2017 and beyond. That's because the company recently announced that it agreed to acquire a 20% stake in Brazilian oil giant Petrobras' (PBR -0.06%) natural gas transmission utility for $825 million. Brookfield Infrastructure is leading a consortium with parent company Brookfield Asset Management (BAM -0.11%) to acquire the business from Petrobras for $5.2 billion. The company expects to close the deal by the end of this year, driving meaningful earnings growth in 2017.

In addition to that, the utilities segment has $850 million in planned investments over the next couple of years. This is projected to drive 8% annual growth in regulated distribution earnings and deliver a 6% annual increase in electricity transmission earnings over the next five years. While those are slower growth rates than the two energy businesses, the growth is higher in absolute value because it is coming off a much larger base.

Brookfield Infrastructure's energy segment is the primary fuel driving earnings growth this year and should continue to do so over the next two quarters. However, while that segment has tremendous growth in the pipeline, it will likely take a back seat to the company's utilities segment after 2016. Not only did utilities recently announce a major acquisition, but it has a larger near-term pipeline of organic growth projects, putting it in the position to deliver robust earnings growth going forward.