Over the past several years, graphics specialist NVIDIA (NASDAQ:NVDA) has worked to fundamentally transform its business mix. In particular, the company has focused on growing revenue in its gaming, professional visualization, data center, and automotive businesses -- what NVIDIA refers to as its "growth platforms."

The latter segment consists of royalty payments from microprocessor giant Intel (NASDAQ:INTC) and sales of graphics processors into personal computers that aren't targeted at gaming applications. Since the company's fiscal year 2013, revenue in this segment has plunged from $2.06 billion to just $783 million.

Although NVIDIA has made it clear that it has de-emphasized its OEM business, it apparently hasn't completely given up on it. Indeed, it would appear that the graphics specialist may be trying to win back spots inside of Apple's (NASDAQ:AAPL) Mac products -- spots that it lost beginning with the late 2014 iMacs and mid-2015 15-inch MacBook Pro.

NVIDIA posted the following job listing on its website about a week ago: 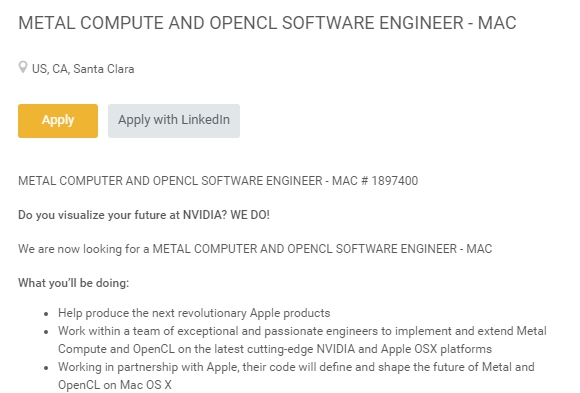 From the listing, we can see that NVIDIA is working on software to allow its graphics processors to function properly in future Mac products.

In light of this, I wouldn't be surprised to see Apple choose NVIDIA graphics processors for future iMacs, MacBook Pros, or both. That said, we can't really infer much about potential timing of NVIDIA's inclusion in future Mac products from this job listing, if the company's chips are ultimately selected.

That being said, NVIDIA already spends the money to develop chips appropriate for such systems, so even if sales of these products serve to dilute overall gross profit margins, these products are still likely to positively contribute to both revenue and total gross and operating profit.

To put the potential unit opportunity into perspective, keep in mind that Apple shipped roughly 20.6 million Macs in its last fiscal year. If we assume that one-fourth of its total unit shipments utilize standalone graphics processors, then the potential opportunity at Apple for NVIDIA should be in the ballpark of 5.15 million units.

Furthermore, if we assume that the average selling price per unit in this segment is in the ballpark of $40, then the total yearly revenue opportunity at Apple could be around $200 million. Even winning back approximately half of that opportunity could contribute an additional $100 million to NVIDIA's top line. At, say, 35% gross profit margins , that would mean approximately $35 million in incremental operating profit for the company.

In fiscal year 2016, NVIDIA reported non-GAAP operating profit of $1.125 billion. An extra $35 million in operating income wouldn't be a financial game changer in that context, but it wouldn't be something to sneeze at, either.