Companies in the automotive industry can run, but they can't hide from plateauing vehicle sales in the U.S. market. It's that pessimism throughout the markets that has pummeled a number of automotive stocks, and while CarMax (NYSE:KMX) has managed to improve its stock price in 2016, it's still been a rough slide from last year's peak. 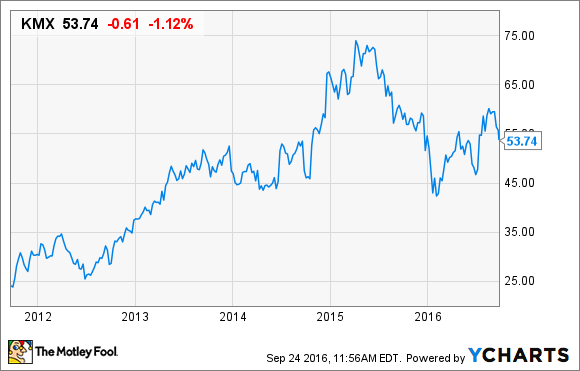 But what has the market so down on the company's second-quarter fiscal 2017 results?

Starting with the top line, CarMax grew its revenue by 2.9% to $4 billion, which was slightly below analyst estimates of $4.11 billion. Net earnings declined $9.9 million, or 5.7%, to $162.4 million during the second quarter, but thanks to share buybacks, the company's net earnings per diluted share moved 2.4% higher to $0.84. That missed analyst estimates by four pennies, but if you exclude the modification of equity awards held by CarMax's recently retired CEO, that adds four pennies back to match earnings estimates.

Another figure of importance to investors is same-store sales. As CarMax continues to open many stores annually, it's important to look at sales from stores that have been open at least one year to see whether or not the company is improving its sales conversion with store traffic. Comparable stores increased 3.1% during the second quarter, while total sales grew 7%, but there was definitely more to the story.

CarMax pays a fee to other third-party vendors for them to offer loans to subprime borrowers; these are known as tier 3 sales, and they declined to generate only 9.5% of sales compared to last year's near-14% mark.

Now, excluding those riskier customers, CarMax's non-tier 3 same-store sales rose 8.1%. In terms of overall business, CarMax lost some, but as an investor, if you could choose what tier you'd prefer to lose sales from, this is the preferred scenario.

What's the problem with Q2 results?

In my opinion, the part of CarMax's second quarter that didn't sit well with investors was its vehicle pricing. CarMax generates a vast majority of its gross profits from used and wholesale vehicle sales. Its used vehicle average selling price checked in at $19,530 during the second quarter, which was a 2.3% decline from the prior second quarter's $19,983. CarMax's average pricing for its wholesale declined to a steeper degree, down 4.1% to $5,119.

Now, that top-line reduction hasn't resulted in less gross profit per unit in CarMax's used vehicle segment, which was down to $2,160 from last year's $2,166 level. However, wholesale vehicle gross profit was a slightly different story, declining from last year's $951 per unit to $870. It seems as if the market is predicting more pricing pressure, which could shrink margins going forward. Here's a long-term look at CarMax's used pricing, which does show recent softness, albeit still near record highs. 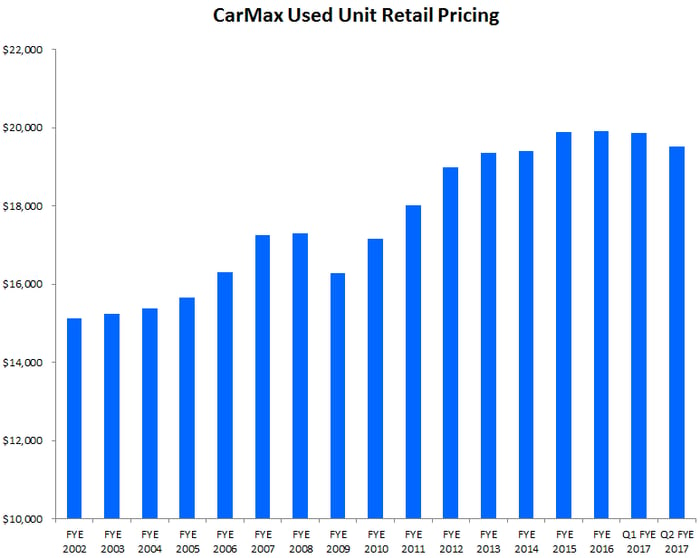 Perhaps judging that graph depends on whether you have a glass-half-full or half-empty perspective, and Wall Street seems to take a half-empty view.

What's down the road?

There are a couple of things for investors to keep an eye on. One is the store openings, and the costs associated with those openings. CarMax plans to open between 13 and 16 stores over the next year. Breaking that down between fiscal 2017 and 2018, CarMax plans to open 15 stores in 2017 and another 13 to 16 in fiscal 2018. So, when the calendar flips over and investors look back at the 2017 openings, CarMax hopes its capital expenditures will total about $450 million.

Another development for investors is CarMax's new website, where the company is testing new online shopping capabilities and techniques in an attempt to reach customers hoping to finish more of the purchase online, and customers who don't have access to a nearby CarMax store.

Ultimately, CarMax still has a long road ahead for growth, but it's in a transition. CarMax is no longer dramatically increasing its used vehicle pricing, which was bound to happen at some point. But that doesn't mean its total revenue is going to stop, nor will its bottom line. This could just be a transition period when investors realize CarMax's growth will mostly come from store expansion and store efficiency, not vehicle pricing.