Between mid-2014 and mid-2015, Advanced Micro Devices (NASDAQ:AMD) watched helplessly as its unit share of the discrete graphics card market was cut in half. Rival NVIDIA (NASDAQ:NVDA) scored a coup with its 900 series of graphics cards, particularly the GTX 970, which remains to this day the most widely owned graphics card among Steam users. AMD's market share bottomed out during the second quarter of 2015, at just 18%. 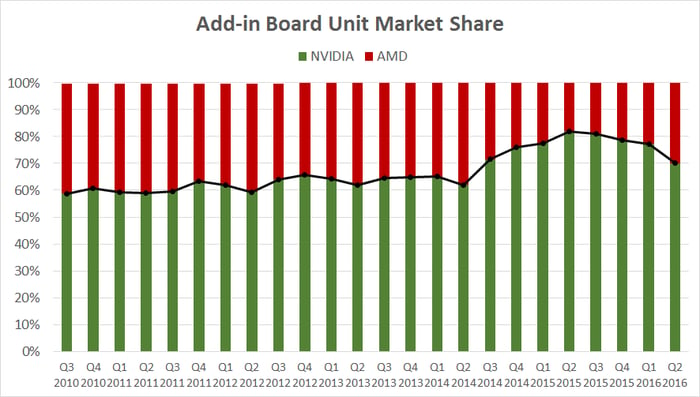 Another issue is the timing of new product launches. NVIDIA's high-end GTX 1080 became available at the end of May, and the GTX 1070 became available in the beginning of June. The GTX 1060 wasn't launched until the end of July, with a $200 variant only becoming available in August. Meanwhile, AMD's $200 RX 480 launched in the last days of the second quarter, with the lower-end RX 470 and 460 launching in August.

The second-quarter data, then, doesn't tell us much about how AMD's new Polaris graphics cards are faring. Despite losing market share, NVIDIA posted solid second-quarter results. The company's gaming segment grew revenue by 18% year over year, driven by the high-end Pascal cards. AMD winning market share during the second quarter may have been driven more by NVIDIA's focus on the high end, leaving the mainstream to AMD, than anything else.

As it stands today, AMD's Polaris graphics cards target the $200-and-below segment, while NVIDIA's Pascal graphics cards target the $200-and-above segment. Eventually, NVIDIA will launch lower-end products, and AMD will launch higher-end products, but at the moment, the two companies' newest graphics cards are only directly competing at the $200 price point. This should help AMD win mainstream market share during the third quarter, at the expense of ceding the lucrative high-end portion of the market to NVIDIA.

Rumors point to NVIDIA launching two low-end cards, the GTX 1050 and GTX 1050 Ti, as early as next month. Nothing has been confirmed at this point, but the cards are expected to target the $119 and $149 price points, respectively, putting them in direct competition with AMD's RX 460 and RX 470. Depending on how aggressive NVIDIA is with these new cards, AMD's edge in the mainstream portion of the market may not last too much longer.

AMD's market share gains during the second quarter are certainly a positive for the company, but they need to be considered in context. We won't know how Polaris has truly fared until results from the third quarter are released, and the imminent launch of low-end cards from NVIDIA could make it tougher for AMD to hold onto any market share gains in the fourth quarter and beyond. Where the market for discrete graphics cards ultimately settles, whether it's the old 60-40 split in NVIDIA's favor, or something else entirely, is still a big unknown.