Despite earning record profits, U.S. airlines have been on their heels for the past year or so due to persistent unit revenue declines. Top carriers like American Airlines (NASDAQ:AAL) and Delta Air Lines (NYSE:DAL) have slashed their capacity plans multiple times in the last year in order to stabilize unit revenue. So far, they haven't succeeded.

However, the unit revenue trajectory is finally starting to improve at American Airlines. This could potentially enable the company to return to modest unit revenue growth within the next two to three quarters.

During 2015, Delta Air Lines posted shallower unit revenue declines than American Airlines. By the end of the year, it appeared to be on the road to recovery. Indeed, Delta's passenger revenue per available seat mile (PRASM) fell just 1.6% year over year in Q4 2015. This supported management's frequent assertions that Delta would return to unit revenue growth before its rivals.

Delta seemed to be close to returning to unit revenue growth in late 2015. Image source: The Motley Fool.

However, Delta's revenue trends have taken a turn for the worse this year. PRASM slumped 4.9% last quarter, and Delta expects to report a PRASM decline of about 7% for Q3.

Delta's Q3 revenue performance was negatively impacted by about 1 percentage point due to the company's August technology outage. Delta executives have said that the unit revenue trajectory will improve dramatically in September and beyond. It's important to take those predictions with a grain of salt, though, given that Delta's management has had to slash its revenue guidance repeatedly this year.

In any case, based on Delta's reported July and August unit revenue statistics and its current Q3 guidance, the company's September unit revenue is likely to decline 3%-5% year over year. This suggests that Delta still isn't that close to unit revenue growth.

Another bright sign is that American's current revenue outlook is actually 0.5 percentage points better than the original guidance that management provided in late July.

American Airlines should benefit from the same trend of sequential revenue improvements as Delta. Both carriers are dramatically reducing capacity growth going forward compared to their growth rates during the first eight months of the year.

If anything, American Airlines should see a faster recovery because it faces easier revenue comparisons than Delta for the next few quarters, and especially in Q4.

Additionally, American Airlines will benefit from its market-leading position in Brazil. Last year, unit revenue plunged for routes to and from Brazil due to a combination of economic weakness and the rapid rise of the U.S. dollar relative to the Brazilian real. For example, in Q4 2015, American Airlines' unit revenue on Brazilian routes was down a staggering 40% year over year.

The Brazilian economy remains in a deep slump. However, American Airlines' competitors have finally reacted to the weak economic climate by cutting capacity. And surprisingly, Brazil's currency has come roaring back in recent months. As a result, exchange rates will go from being a stiff unit revenue headwind in Brazil during the first half of 2016 to a tailwind next quarter. 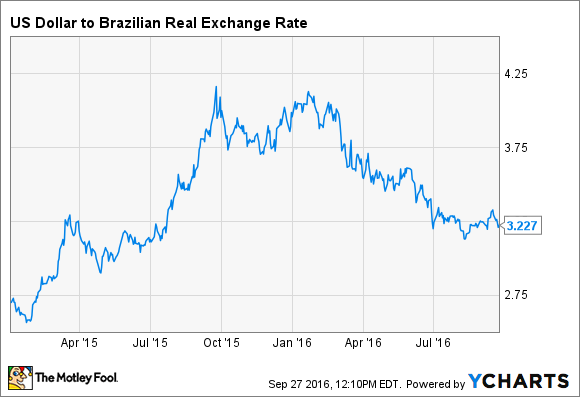 US Dollar to Brazilian Real Exchange Rate, data by YCharts.

As a result, there is an outside chance that American Airlines could return to (modest) unit revenue growth in Q4. If that proves too challenging, additional tailwinds will arrive in early 2016, including another step up in credit card revenue and the rollout of new basic economy fares and international premium economy seats.

American Airlines could beat Delta to the punch

In recent weeks, Delta executives have repeated their contention that Delta will be the first legacy carrier to return to unit revenue growth. However, American Airlines' fast-moving unit revenue recovery could spoil Delta's plans.

American Airlines stock has been falling out of favor among some airline analysts after it surged more than 50% between late June and early September. But if American can return to unit revenue growth by late 2016 or early 2017, the stock will probably continue its ascent.