Geographically speaking, investors are well aware of where Apple, Inc.'s (NASDAQ:AAPL) priorities lie. Greater China is one of the company's main growth engines at this point, and continues to march toward a day when it overtakes the U.S. business. CEO Tim Cook has predicted this will occur within the next few years, but right now the U.S. is still about $25 billion larger on a trailing-12-month basis. India is the next big country to tackle, while Apple slowly continues to build out its operations in Russia.

That covers three of the BRIC countries. But what about the "B"?

Brazil is just part of the picture

It wasn't until early 2014 that Apple opened its first retail store in Brazil, and there are currently only two stores within the country. Beyond just Brazil, it may surprise you to learn that Apple's business in Canada and South America combined is actually extremely small.

Apple reports Americas as a geographical operating segment, while separately disclosing the international mix of sales in its earnings releases. We can use the inverse of this figure to calculate Apple's domestic U.S. revenue, and then compare that to the broader Americas segment. Here's what we get if we back out U.S. revenue from Americas revenue. 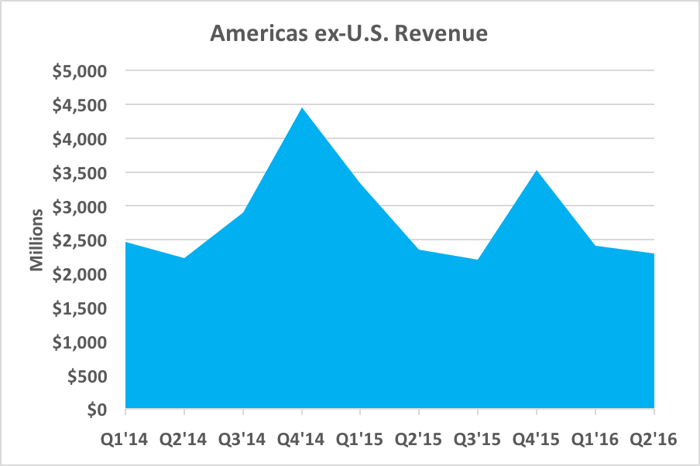 Americas ex-U.S. revenue, which would include all of Canada and all of South America, is typically only in the ballpark of $3 billion per quarter, plus or minus a billion or so. (The average since 2014 is $2.8 billion per quarter.) Apple has been doing quite well in emerging markets recently with various initiatives intended to make iPhones more affordable.

To be clear, Apple has long faced headwinds in Brazil, mostly in the form of massive import tariffs that make it the most expensive country in the world to buy an iPhone. The whole only-two-stores-in-the-country thing doesn't help, either (even though Apple sells through third-party distributors). The Brazilian real has also been fairly volatile in recent years, making it tricky for Apple to properly price its products as it must navigate currency translation effects (net of hedging).