Microsoft (NASDAQ:MSFT) recently created a new AI and Research Group, staffed by 5,000 engineers and computer scientists, as its fourth engineering group alongside Windows, Office, and Azure. The new division merges its Microsoft Research and Information Platform Groups with the teams working on Bing, Cortana, robotics, and "ambient computing" environments, which are responsive to the presence of people.

The group will be led by Harry Shum, a 20-year Microsoft veteran who previously served as the company's Executive VP of Technology and Research. Microsoft stated that the group will use a "four-pronged approach" to "democratize AI": by offering intelligent services in "agents" like Cortana, infusing applications with features like Skype translate, adding services with facial recognition and machine analytics, and expanding its cloud infrastructure to "build the world's most powerful supercomputer with Azure."

At Microsoft's Ignite conference in late September, CEO Satya Nadella declared that "AI is at the intersection of our ambitions." But are other rivals like Alphabet (NASDAQ:GOOG) (NASDAQ:GOOGL), Facebook (NASDAQ:FB), and Amazon (NASDAQ:AMZN) already too far ahead of Microsoft in the AI market?

For Microsoft's annual cloud revenue to continue growing, it must use Windows, Office 365, Skype, Bing, Cortana, Dynamics CRM, and Azure to gather more information from users. By analyzing that data in the cloud, its apps can provide more personalized experiences, companies can gain valuable business insights via analytics, and Microsoft can sell more targeted ads. Nadella hopes that Microsoft can eventually create an intelligent assistant that "knows your context, your family, your work" and can function across multiple platforms and applications -- even those which don't belong to Microsoft. 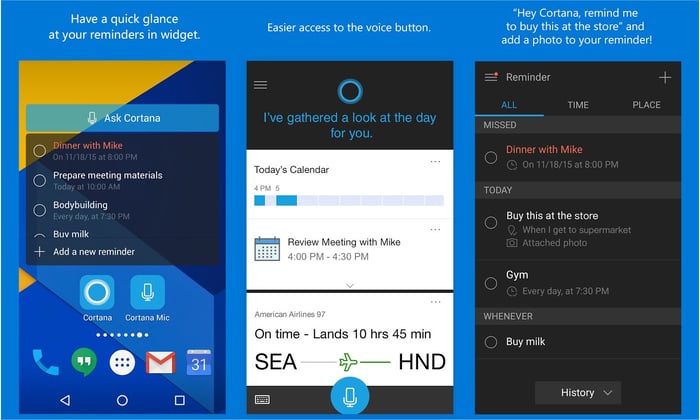 In other words, Microsoft aspires to be more like Alphabet's Google, which built its entire ecosystem on users' search, web browsing, and location records. It's also trying to be more like Facebook, which uses the data gathered from users' social connections and interactions to deliver targeted ads. Therefore, it isn't surprising that Google and Facebook have also been investing heavily in their AI divisions.

Microsoft also hopes that Azure can close the gap with Amazon's AWS, the biggest cloud infrastructure platform in the world. Microsoft doesn't disclose how much revenue Azure generates, but Forrester Research estimated that the cloud platform only had a run rate of $1.5 billion last October. Microsoft claims that Azure grew more than 100% over the past four quarters, so it could have a run rate of over $3 billion today -- but that still pales in comparison to AWS' run rate of $11.5 billion.

Google, Facebook, and Amazon all have unique strengths in the AI market. Google owns the largest mobile OS in the world and knows what people look for, Facebook understands their social connections, and Amazon understands their shopping habits. Amazon's AWS also gathers and analyzes data for companies that host content on its servers.

However, Microsoft tethers larger enterprise customers to its ecosystem with its business mainstays Windows and Office 365. Dynamics CRM reaches far fewer businesses than market leader Salesforce, but Gartner reports that the fourth-place CRM platform still grew its market share year-over-year in 2015. Tighter integration of all these platforms into Windows 10 and Azure could widen Microsoft's moat against its cloud rivals.

An ecosystem battle is certainly brewing between these tech giants, but the companies also realize that they need to be on the same page regarding practices like safety testing, "laws" of robotics, security, and privacy issues. That's why Microsoft, Google, Amazon, Facebook, and IBM recently formed a new consortium called the Partnership on Artificial Intelligence, which will host those discussions and potentially serve as a lobbying force for AI-related legislation.

Staying ahead of the tech curve

Microsoft never recovered from missing the technological shift toward mobile devices and applications, but it clearly doesn't plan to miss another shift by ceding the AI market to Google, Facebook, or Amazon. However, the company faces tough battles ahead from mobile-first, cloud-first rivals which are likely gathering data at a faster rate across more platforms.