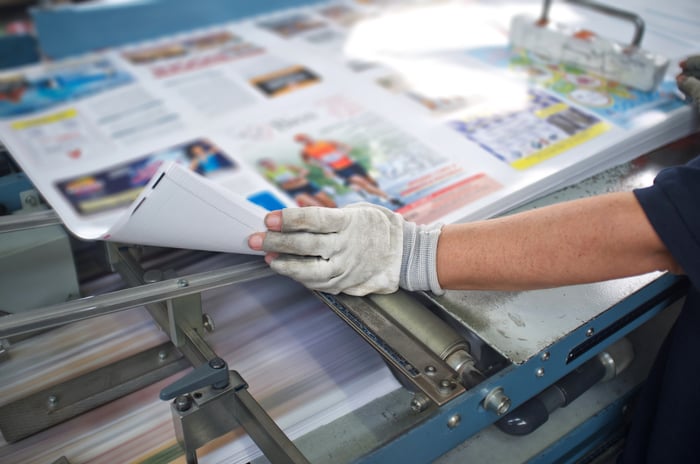 Investors looking at RR Donnelly & Sons Co (NYSE:RRD) stock may have been shocked to see the stock up by more than 50%. That was inaccurate, however, as some news outlets incorrectly reported what was actually a three-way split as a surge in the stock. Instead, the print-supplies specialist actually fell 2.4%.

RR Donnelly said this morning that it completed its previously announced separation plan, which entailed tax-free spinoffs of its publishing arm, LSC Communications (NYSE: LKSD), and its financial communications and data service business, Donnelly Financial Solutions (NYSE: DFIN). Thomas Quinlan, who was CEO of RR Donnelly but will now be LSC's chief, called the event a milestone, adding, "With this transaction, we have created three focused companies, which we believe are positioned to pursue their own growth strategies with tailored capital structures to better finance each business's strategic plan."

Spinoffs like this one can be confusing to shareholders, as well as news sites. RR Donnelly will receive a cash distribution from each new enterprise as part of the arrangement to help reduce its debt, and it will also retain a 19.25% stake in each new company. RR Donnelly shareholders on the date of record, September 23, received one share of LSC and one share of Donnelly Financial for every eight shares of RR Donnelly they owned.

RR Donnelly also underwent a 1-for-3 reverse stock split, meaning the stock price is triple what it was before, but holds the same value. RR Donnelly also said it would pay a "dividend in line with industry practices," though it was unclear how or if that would affect the current payout.

Fundamentally, shareholders' holdings are essentially the same, though they are now divided over three companies instead of one.