Disney (NYSE:DIS) is known around the world for being the name behind many of the most popular movies in history. However, the company is about much more than films, and its unique business model is a major advantage for investors.

Making money from the magic factory

When Disney launches a successful movie, the company obviously profits directly from the production. Disney is particularly prone to building franchises around its movies, so a successful production typically means multiple films from the same franchise over time. The company has already mapped out its plans for the Star Wars franchise until 2020, and it's now planning new Star Wars movies for 2021 and beyond. 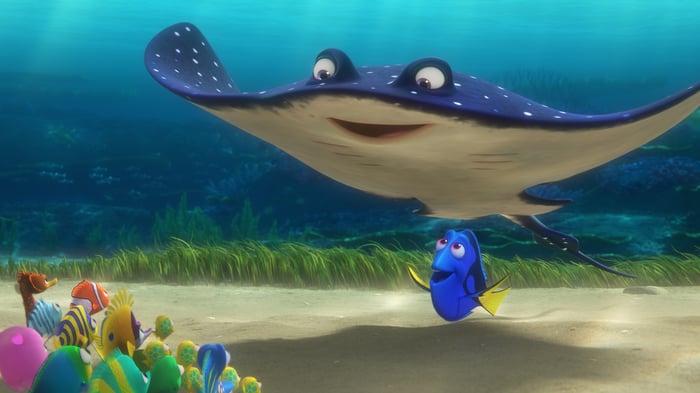 The movie studio business generally carries a high degree of operating leverage, meaning that costs tend to be more stable than revenue. For this reason, movie studios can make massive profits when a movie performs well at the box office, or they can take huge losses if things don't work out as expected. Disney is second to none in terms of its ability to deliver what customers want, and the company produced an operating margin around 27% of revenue in the studio segment last quarter.

Even better, Disney builds brands around its characters and intellectual properties, and it monetizes those brands via multiple platforms at the same time. A successful movie means additional business opportunities for Disney in areas such as live shows, toys and merchandise, video games, and entertainment park attractions, among others.

The company has doubled the size of its consumer products division in terms of profits over the past four years, and this is clearly related to blockbuster movies like Frozen and productions from Marvel and Star Wars.

Disney has made a series of big acquisitions over the past several years, including the purchase of Pixar for $7.4 billion in 2006, Marvel for $4.24 billion in 2009, and Lucasfilm and the Star Wars franchise for $4.05 billion in 2012. According to CEO Bob Iger, the company has released 29 movies since then, and the average global box office of each of those films is barely below $800 million.

Disney has a unique ability to profit from acquisitions. The company knows how to turn intellectual assets into successful movies and franchises, and then it leverages those films into additional profits in other business segments. Because of this dynamic, a company like Marvel is arguably more valuable as part of Disney's empire than as a stand-alone business.

According to recent market rumors, Disney could be interested in acquiring Netflix (NASDAQ:NFLX). In fact, shares of Netflix popped up by more than 4% on Monday due to market speculation about this possibility. There has been no confirmation whatsoever from Disney or Netflix, and the rumors could easily turn out to be entirely speculation.

On the other hand, Disney and Netflix have a very particular relationship. While the two companies are competitors to some degree, they are also partners when it comes to content production and distribution, and they have a lucrative relationship in that area. If Disney and Netflix decided to definitively join forces, they could build an unparalleled content powerhouse with a leading presence in key growth areas such as online streaming.

Integrating a high-growth business Netflix into Disney's operations would be a considerable challenge, but the company has a rock-solid track record of successful acquisitions over the years. Besides, it's easy to see how Netflix and Disney could both benefit by combining their content, technologies, human talent, and financial resources.

One of the main risk factors that Disney is facing is declining ESPN subscriptions, as many consumers are cutting or significantly reducing their cable bills and turning toward online TV platforms like Netflix. With that in mind, a Netflix acquisition would also have significant benefits for Disney in terms of risk diversification.

None of these means that a Netflix acquisition from Disney is going to happen, however, it's good to know that Disney is one of the few companies in the world that has the money and the strategic resources to successfully make such move.

Disney has an extraordinary ability to turn intellectual properties into successful movies, and then build additional business opportunities around those movies. This has major implications for investors in the company, not only when it comes to organic growth opportunities, but also in terms of the company's ability to drive growth through acquisitions.