On Sept. 20, Microsoft (NASDAQ:MSFT) announced an 8% dividend increase and a new $40 billion share buyback program. The company has rewarded investors with generous cash distributions over the past several years, which looks like a smart decision from management. However, it's hard to tell if repurchasing stock is the best use of the company's capital at current prices.

The PC industry is languishing, and this is a major challenge for Microsoft in its very important Windows business. Under the leadership of Satya Nadella, who was appointed CEO in February 2014, the company is becoming a more agile and user-friendly organization, and it's also expanding into promising segments such as cloud computing. However, financial performance still leaves much to be desired.

Growth rates are not particularly exciting, but Microsoft is a consistent cash-generating machine; the company produces nearly $25 billion in free cash flow annually. Since the business is maturing, it makes sense for Microsoft to distribute a big share of free cash flow to investors as opposed to retaining it for reinvestment purposes.

The company has materially increased dividends over the last decade. In November 2006, Microsoft paid a quarterly dividend of $0.1 per share. Ten years later the company is scheduled distribute $0.39 per share in November 2016.

Stock buybacks have also been quite substantial over the past several years. In September 2013 Microsoft announced its previous share buyback program, the one which is about to be completed and replaced by the recently announced program, also for $40 billion. The company has repurchased nearly $15.3 billion in stock over the last 12 months. 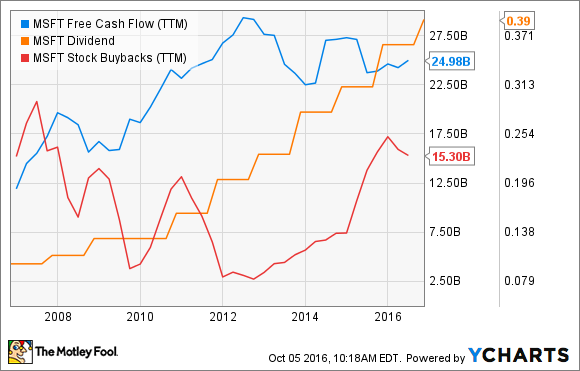 On buybacks versus dividends

When it comes to distributing capital via dividends or share buybacks, the implications for investors are quite different. Dividends are straightforward cash payments. As long as Microsoft keeps generating more cash than it needs to reinvest in the business, it makes sense to continue increasing dividend payments over time.

Stock repurchases, on the other hand, are a completely different story. Many analysts have a negative opinion on stock buybacks, since companies tend to excessively use them in order to reduce the share count and artificially inflate earnings per share. By implementing such a big buyback program, Microsoft is in fact investing in its own stock. Depending on how the stock performs over the coming years, this could turn out to be a profitable investment or a destructive move in terms of shareholder value.

The company is moving in the right direction with several of its most recent growth initiatives, but Microsoft is on the wrong side of many important industry trends, such as mobile computing, and it won't be easy for the company to accelerate revenue growth in the mid-term.

The fact that management is repurchasing stock can be interpreted as a sign of confidence on the future of the business. Nevertheless, many corporate executives are usually too optimistic about the companies they run, and they often repurchase shares at inconveniently high prices.

Valuation looks reasonable, but Microsoft stock is no bargain at current prices. Microsoft carries a forward price-to-earnings ratio around 19.5, roughly in line with the average company in the S&P 500 index. Similarly, the dividend yield stands at 2.7%, while the average stock in the index pays a dividend yield of  2.3%.

In order for Microsoft stock to deliver market-beating returns from current price levels, the company needs to prove to investors that it can accelerate growth, overcome its problems in the legacy business, and capitalize on opportunities in its Azure platform, Office 365, Dynamics, and the recently announced acquisition of LinkedIn. Unfortunately, the jury is still out regarding Microsoft's ability to successfully make that transition.

Microsoft is a mature business with abundant cash flows and limited opportunities for profitable investments, so the company is doing the right thing by increasing capital distributions to investors. However, dividends and buybacks are very different ways to return cash to shareholders. While dividends are clearly a solid choice, buybacks are far more controversial considering the company's current situation and future prospects.