DSW Inc. (NYSE:DBI) stock fell 15% last month, according to data from S&P Global Market Intelligence,  as the footwear retailer was the subject of some negative analyst research and continued to slide following a weak earnings report at the end of August. As the chart below shows, the bulk of the decline came in the middle of the month when the analyst reports came out. 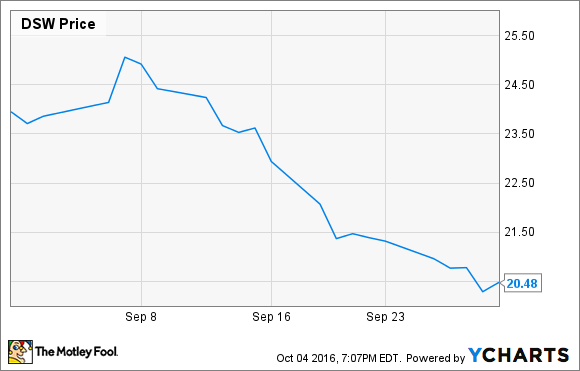 The footwear retailer limped into September as the stock fell 10% on Aug. 30 after it posted an underwhelming earnings report that included a comparable store decline of 1.2%. Earnings per share also dropped 17% from a year ago, and the company expects EPS for the full year to decline.

Unsurprisingly, several analyst downgrades came following that report. Susquehanna Advisors initiated coverage on Sept. 15 with a negative rating and a price target of $19. At the same time, the stock was downgraded to "hold" from "buy" by Zacks Investment Research.

DSW has been aggressively opening stores this year, announcing several openings in the past month and planning to grow its store base by more than 10%. That expansion comes at a time when several department stores and mall-based retailers are closing locations, putting the strategy in question especially when the company is posting declining comparable sales.

However, DSW has not neglected e-commerce as it acquired Ebuys earlier this year, an off-price online global footwear retailer, for an up-front payment of $62.5 million and additional payments contingent on performance.

At this point, DSW stock may have further to fall before it recovers. While the company has a solid dividend yield near 4% and a promising low-cost business model that puts all of its merchandise on the sales floor, it's hard to see the stock bouncing back while comparable sales and profits are falling.