Sears Holdings Corporation (NASDAQ:SHLDQ) shares were getting hammered last month as the ailing retailer continued to be surrounded by negative news and concerns that it would go bankrupt following another ugly earnings report at the end of August. The stock fell 17% according to data from S&P Global Market Intelligence. 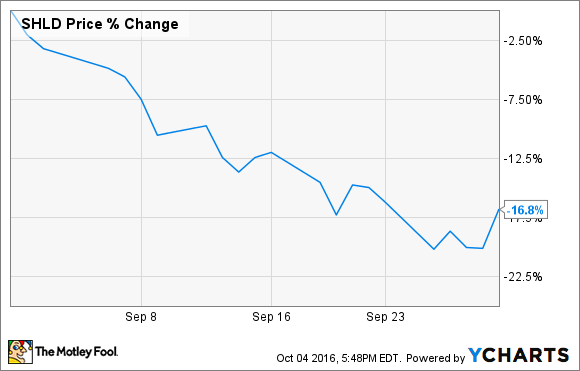 Several news items out on Sears during the month fueled speculation on the company's future as reports emerged that it would shut down even more stores. The stock fell 11% over a two-day stretch at the end of August as the company saw comps fall again at both Kmart and Sears, by 3.3% and 7%, respectively, as its per-share loss more than doubled from the year before.

More bad news trickled out over the course of September. First, CEO Eddie Lampert said he would lend his company $300 million to help shore up liquidity after its cash pile had dropped to $276 million from $1.8 billion a year ago. Then, Moody's downgraded the company's liquidity rating, saying Sears and Kmart don't have enough money to stay in business, noting that it would have to continue to rely on outside financing or asset sales to fund the business.

Later in the month, The Wall Street Journal reported that Kmart would close another 64 locations, which comes on top of the 68 closures the company announced in April, meaning Sears would shutter 14% of its Kmart stores.  Finally Fitch Ratings echoed Moody's, saying that the company had "significant default risk" based on years of declining store traffic and high levels of default.

While the end may be near for Sears, Eddie Lampert reassured investors and vendors that Kmart wasn't about to close. Threats of bankruptcy can scare off suppliers who become afraid they won't be paid.

Two days into October, Sears stock actually soared on reports the company had a buyer for its Craftsman line of tools. Bloomberg reported that Stanley Black & Decker was among interested bidders for the brand that could sell for as much as $2 billion at the end of the month. The stock jumped as much as 20% on the news on Tuesday, and finished up 6%.

That cash infusion would certainly be helpful for Sears, but as long as the underlying business is bleeding cash, the stock should only continue to fall. I'd expect more months like September.