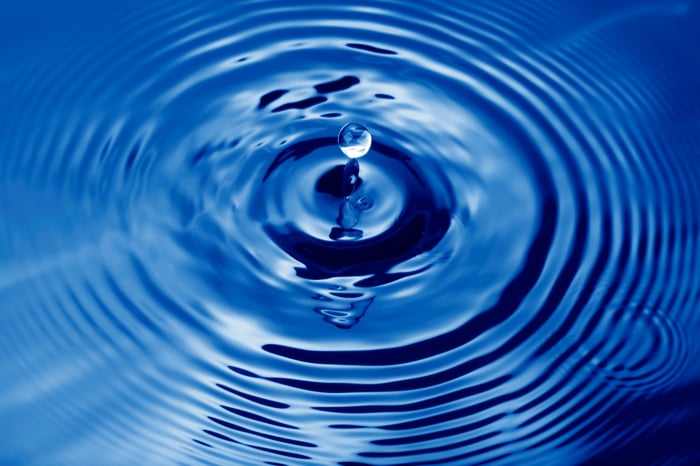 American Water, like most water utility stocks, has had a big run-up in price since mid-2015, driving its valuation to a high level. So investors should be aware that it could pull back over the median term. However, here are three top reasons American Water makes an attractive long-term investment.

1. It's in the right business

Fresh water is the most essential product that we humans need to live that isn't free. Moreover, the supply demand equation favors water stocks:

While there are various ways to invest in water, water utilities are the surest bets because their regulated businesses are monopolies. Additionally, most of them pay a decent dividend. (American Water's dividend is currently yielding 2%.)

2. Its size and geographic diversification provide its regulated business with a competitive advantage

American Water sports a considerable competitive advantage over its peers in its core regulated business -- which accounts for more than 90% of its total net income -- stemming from its larger size and greater geographic diversification.

The company has a market cap of $13.1 billion -- more than twice the $5.3 billion market cap of Aqua America, the second-largest industry player in the U.S. It generated $3.25 billion in revenue over the trailing 12 months, which is four times as much as Aqua America pulled in. American Water provides services to approximately 15 million people in 47 U.S. states and one Canadian province, and operates as a regulated utility in 16 of these states. The second most geographically diversified company, Aqua America, has regulated operations in just eight states.

American Water's industry-leading size provides it with more resources to grow through acquisitions -- and there's much acquisition potential because the industry is very fragmented in the U.S. (as the chart below shows). Its geographic diversification means it can often expand near its existing operations without adding full new workforces. Moreover, this diversification makes it less vulnerable to regional-specific challenges, such as droughts. American States Water has been struggling recently because its entire regulated business is in California, much of which is in the fifth year of a severe drought. 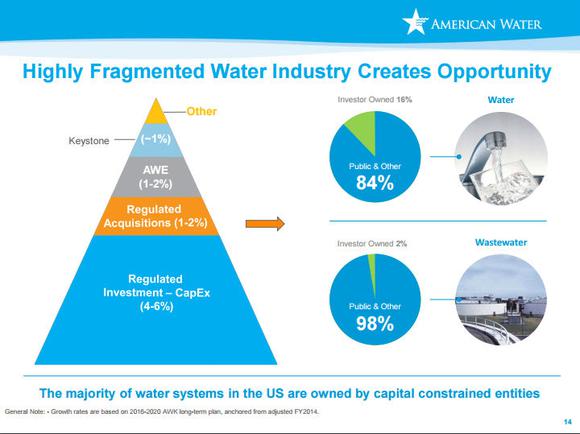 The highly fragmented industry is one factor that should help American Water achieve its goal of a 7% to 10% earnings per share compounded annual growth rate from 2016 to 2020 (anchored by adjusted 2014 EPS). Image source: American Water.

3. Its market-based segment and Keystone subsidiary provide it with additional growth potential

American Water's market-based business, which accounted for 8.4% of its segment earnings per share in the second quarter of 2016, primarily builds, operates, and maintains water systems for military bases in the U.S. While the company must bid to win these long-term contracts, it still gets to set its own rates, which provides it the potential for higher profit margins.

Keystone Clearwater Solutions is also a market-based business, but operates as a subsidiary. American Water entered the "fracking" water business in mid-2015 when it acquired Keystone, which supplies water and related services to natural gas exploration and production companies in the Marcellus and Utica shale regions of the Appalachian Basin. This acquisition was feasible because American Water has regulated operations in Pennsylvania and West Virginia.

It seems likely that American Water was able to pick up Keystone at a good price given the timing of the buy -- about a year after the huge downturn in the energy markets started. While the market for fracking water is still depressed, natural gas companies are picking up their drilling activities due to the rebounding price of natural gas. American Water's CEO Susan Story said on the last earnings call that the company is optimistic about Keystone's prospects once the recovery in the natural gas market makes further progress. Keystone is expected to have a neutral effect on earnings in 2016.