Oil giant BP (NYSE:BP) has undergone an enormous transformation since the Deepwater Horizon disaster in 2010. The company has sold a stunning $75 billion in assets to pay for the related liabilities as well as to reposition its portfolio for future growth. Because of that the company is sitting on $23.5 billion in cash, which is the largest war chest among the top-five big oil companies: 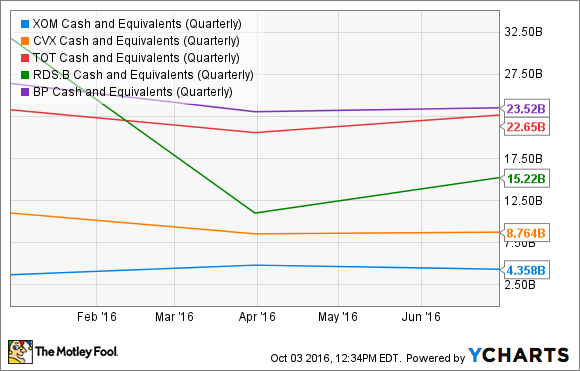 A war chest that big might have investors wondering if a major acquisition or a massive buyback could be on the horizon. Unfortunately, after drilling down into the company's liabilities and cash flow, it is evident that BP has two primary purposes for that money right now: Fund its remaining Deepwater Horizon liabilities and its dividend to shareholders.

Drilling down into the Deepwater Horizon liabilities

This past June BP said that it made enough progress resolving its outstanding claims that it can now reliably estimate all of the material future liabilities resulting from that disaster. According to the company, the cumulative pre-tax charge for the incident will be $61.6 billion. However, it has already paid a substantial portion of that amount including $20 billion for the Trust Fund and another $24.8 billion in other related payments. Meanwhile, it received $5.4 billion in cash from various settlements. That leaves the oil giant with an estimated $22.2 billion in future cash payments from the spill.

While that amount would seem to consume nearly all of BP's cash position, that is not necessarily the plan for its war chest. Instead, CFO Brian Gilvary said on the company's second-quarter conference call that it is actively pursuing additional asset sales to bolster its cash position to "provide additional flexibility and cover for our Deepwater Horizon payment commitments in the United States." In fact, the company is planning to sell $3 billion to $5 billion in assets this year and around $2 billion to $3 billion per year in the future. It has already sold $1.9 billion in assets this year, which helped fund a significant portion of its $2.7 billion in Gulf of Mexico oil spill payments.

Minding the gap between cash flow and capex plus dividends

Due to the downturn in oil prices, BP has not been generating enough cash flow to fund both capex and dividends. As the chart below shows, there's a pretty wide gap between the two: 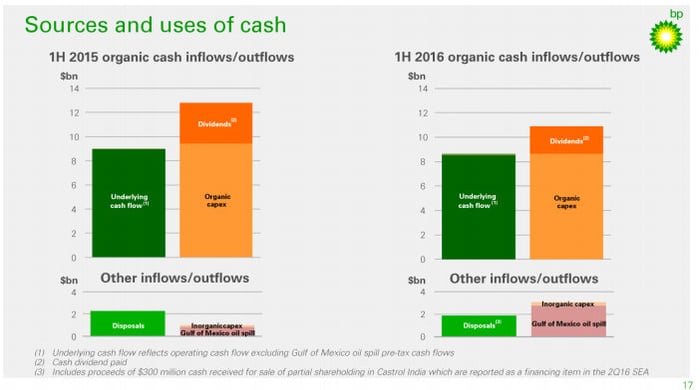 That gap is one reason why the company's cash balance is down from $26.3 billion at the end of last year while total debt is up from $46 billion to more than $50 billion. That shift resulted in total gearing increasing from less than 20% to 24.7% last quarter, though that is well within the company's 30% range.

The company is working hard to close the gap by cutting spending. It is aiming to be in the position where operating cash flow covers both capex and the dividend in a $50 to $55 oil price environment in 2017. That said, in the meantime, it will need some of its cash to sustain the dividend this year.

BP is far from the only oil company that's using its balance sheet to maintain dividends these days. ExxonMobil (NYSE:XOM), for example, paid out $6.2 billion in dividends and spent $10.3 billion in capex through the first half of this year. Unfortunately, ExxonMobil did not come close to generating enough cash flow to cover those expenditures, only generating $10.5 billion in cash, supported by $1.2 billion in asset sales. Chevron (NYSE:CVX), likewise fell short, generating just $5.8 billion in cash flow after excluding working capital effects. That did not even come close to covering the $12 billion Chevron spent on capex, let alone the amount paid out in dividends. That is why Chevron's cash position fell from $11 billion to $8.7 billion over the past six months while debt jumped from $38.5 billion to $45 billion.

While BP might have an enormous amount of cash on its balance sheet right now, that is because it needs it for future outflows such as dividends and Gulf of Mexico liabilities. Because of that, investors should not bet that the company will use its war chest for a major acquisition or a stock buyback.