Skechers (NYSE:SKX) stock keeps getting blasted ever since the last negatively received earnings report. Enough is enough. This is a company that's still growing the top and bottom line by double digits, holds a very small portion of total U.S. shoe market share, and is successfully expanding both in the U.S. and overseas. It's time for investors to start giving this stock a little love again. 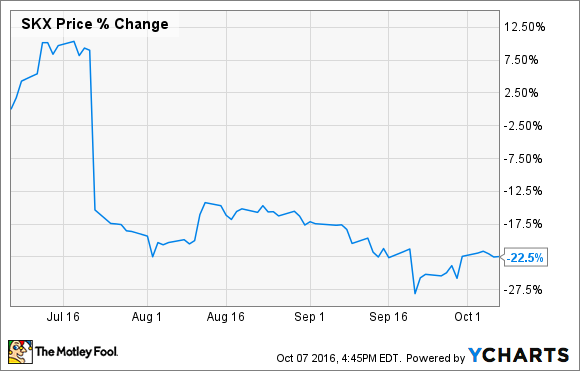 During the company's second quarter, total sales increased only 9.7%. I say "only" because investors were expecting sales to increase by much more. The subsequent disciplining doled out to Skechers' stock is proof of that.

The reason for the lower-than-expected sales figure was that in 2015, shoe shipments from the first quarter got pushed back to the second. This year, some shoe shipments got pulled from the second quarter into the first. Thus, the figures from last year's springtime period were higher because of the shipping schedule, and this year artificially lower.

All of this can be cleared up by combining the first six months' worth of sales and comparing them to last year. The result? A total sales increase of 18.4% over last year. Profit is up 26.3% year over year. And all of this is in spite of a difficult retail environment, especially in the U.S., where the average clothing and accessory merchandiser has eked out a meager 0.1% sales increase over 2015.

Skechers has enjoyed strong growth the past few years on the back of store expansion, especially internationally, as well as through quirky endorsement deals spanning from pop stars such as Megan Trainor to retired football players such as Howie Long. Yet the shoe company is still quite small, with sales so far this year totaling $1.86 billion. That compares with sales of $2.05 billion from competitor Under Armour and $17.3 billion from Nike in their last two quarters.

The smaller shoe company is still the underdog but is now right on the heels of America's No. 2 athletic-wear maker. If you were judging solely on share price, though, you'd never have guessed.

What to look for during the next report

The next quarterly report is expected in two weeks, on Oct. 20. With a downbeat tone dominating the mood as of late, a lot is riding on the next release for Skechers and its investors.

During the last report, company management related that record shipments were being made in both the U.S. and at the new distribution center for Europe. That momentum was carrying over into the third quarter. The outlook for the late summer months was that sales would come in between $950 and $975 million, an 11% to 14% increase over the third quarter of 2015.

Skechers is driving this growth primarily through the opening of new stores, especially in markets outside the United States. Sales derived overseas now account for 45% of total revenue. The company is on track to have 1,600 locations by year's end, most of those outside the States. Europe has been a focus, with the first stores opening in Belgium, Norway, and Finland. But Skechers' presence is even extending into small developing markets, with locations expected to open in Sri Lanka, Uruguay, and Botswana by year end as well.

Thus far, the strategy has been working as the shoe company's top and bottom lines have been growing at a strong clip. Look for confirmation that it's still working later in the month.

Skechers' stock has been getting pounded, as the last quarter's results were not as good as hoped for. Still, in what has been a sluggish retail environment this year, the double-digit top- and bottom-line gains are impressive. It's time for investors to pay attention. Shares look like a real bargain after the recent drop in prices.

The Market Has It All Wrong: Skechers Is a Steal @themotleyfool #stocks $SKX $UAA $NKE Next Article
Current