Shares of Clovis Oncology (NASDAQ:CLVS), a clinical-stage biotech focused on cancer, jumped more than 52% in September, according to data from S&P Global Market Intelligence. 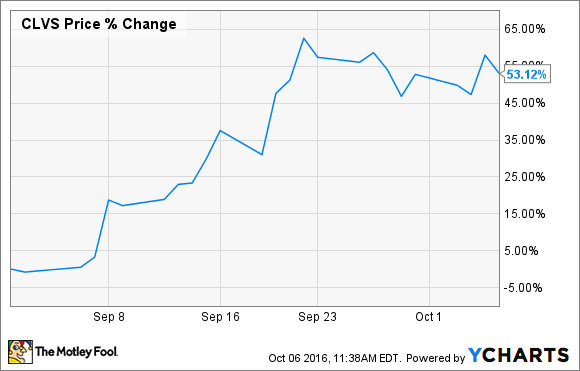 Investors bid up shares in response to a SEC filing that stated that the FDA will not hold an advisory committee meeting to discuss the company's application for rucaparib. Since it is a common practice for the FDA to assemble a panel of outside experts to discuss new drug applications, some traders interpreted this news as a bullish sign.

The FDA had previously announced that it granted rucaparib priority review status, and it assigned a PDUFA date of February 23. The news that the agency is forgoing the advisory committee meeting does hint that it already has enough information on hand to make an informed decision, which is likely to be good news for the drug.

However, earlier this month investors got a look at updated safety and efficacy data for rucaparib that could be a cause of concern. While efficacy data looked good, 61% of patients who used the drug experience a severe adverse event. In fact, 59% of patients experienced an adverse event that led to an interruption in their treatment, and 44% of patients in the study required were put on a lower dose of the drug. Understandably, this update data caused investors to sell off shares.

It is also worth remembering that Clovis does not exactly have a perfect history with the FDA. In addition, investors need to remember that Clovis will have to make a series of milestone payments to Pfizer if rucaparib does win FDA approval. Granted, the $170 million in total potential milestone payments could prove to be small if rucaparib lives up to its full market potential, but Clovis will also owe the big pharma double-digit royalty payments. That could limit the company's long-term upside potential.

Despite that, the odds are still good that Clovis will see its shares soar if rucaparib does win approval. However, given that the drug's PDUFA date is only a few months away, I think the smart move is to keep Clovis as a watch-list stock until we know for sure which way the agency is leaning.