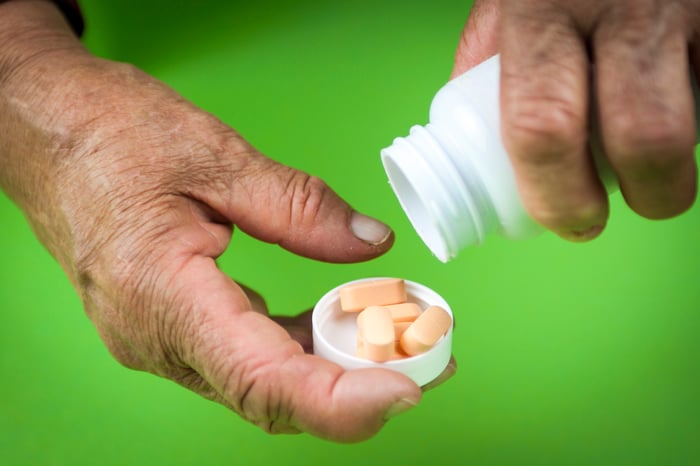 AbbVie's (NYSE:ABBV) Humira reigns as the most successful treatment around for several autoimmune diseases, including rheumatoid arthritis and Crohn's disease. In 2015, the drug generated a whopping $14 billion in sales.

Could Humira be dethroned, though? AbbVie has plenty of rivals working hard to take market share away from the company's top-selling drug. One of those rivals, Johnson & Johnson (NYSE:JNJ), recently announced good news for two of its drugs that target the same indications for which Humira is approved -- and this isn't the only reason AbbVie investors should be nervous.

Johnson & Johnson announced on September 23 that it had submitted sirukumab for FDA approval as a treatment for rheumatoid arthritis. This submission was based on five late-stage studies exploring the safety and efficacy of the drug, which targets cytokine IL-6, a protein that is thought to play a part in causing autoimmune conditions like rheumatoid arthritis.

Results that have been presented so far appear to show that sirukumab is both safe and effective. The key remaining question, though, is how the drug truly stacks up against Humira. The SIRROUND-H study featured a head-to-head match-up of the two drugs. While the study has finished, detailed results have not been announced yet. If those results do indicate that sirukumab is more effective than Humira, J&J could have a big winner on its hands.

However, the giant healthcare company will have to share any win with its partner, GlaxoSmithKline. Glaxo bought the rights to market sirukumab in North, Central, and South America back in 2011. J&J did retain commercialization rights to the rest of the world, but it must split global profits equally with Glaxo.

J&J doesn't have to wait for regulators to battle AbbVie for market share in another approved indication for Humira -- the company announced that Stelara had received FDA approval as a treatment for Crohn's disease on September 26. It won't have to share any profits with another player, either.

Stelara already competes against Humira in a couple of other indications: plaque psoriasis and psoriatic arthritis, and in those indications it does quite well. J&J's drug has proven to be a financial success, bringing in nearly $2.5 billion in 2015.

J&J probably doesn't even represent the greatest threat to AbbVie and Humira -- Regeneron and partner Sanofi should find out later in October if their rheumatoid arthritis drug sarilumab will win approval from the FDA. The two companies also hope to obtain European approval in early 2017.

Like J&J's sirukumab, sarilumab works by inhibiting IL-6. Unlike sirukumab, the drug developed by Regeneron has already proven to be more effective than Humira in a late-stage study.

I think J&J will probably achieve success with sirukumab and further success with Stelara. The big company is definitely nipping at AbbVie's heels with its autoimmune disease products, and other companies have gone beyond just nipping.