It's true that from a far-enough distance, Visa Inc. (NYSE:V) and American Express Company (NYSE:AXP) appear to be close competitors. Both are Dow Jones Industrial Index components, and both generate billions in annual revenue through their respective transactional networks.

Peer a bit more closely, however, and similarities taper off quickly. American Express describes itself as a services business, principally providing charge and credit card services, as well as travel-related services. It's also a bank holding company, subject to U.S. banking regulation. Visa focuses more specifically on payments technology, and sees itself as a key player in the building of a global payments ecosystem. Its "VisaNet" transaction network forms the backbone of the company's business.

Let's take a stab today at determining which of these broadly similar businesses represents the better long-term investment. We'll ground our discussion by first looking at comparative metrics on revenue, profitability, and cash flow:

There's a lot to take in here, but notice first how Visa's compounded annual revenue growth rate, at 10% over the last three years, is fixed in a much higher gear than that of its peer. This is because Visa's revenue is more closely correlated to the growth in the global transactions marketplace. In the organization's most recent quarter, total payments volume, a measure of the dollar value of payments facilitated by Visa, grew 10% to $1.3 trillion.

Unlike American Express, which uses its banking status to issue its own cards, Visa operates an "open loop" network, relying on banking partners to issue its products. The growth in total payments volume is indicative of Visa's potential, as debit and credit transactions continue to rise, despite tepid recent GDP expansion within both developed and emerging economies.

Compare this to American Express, which garners more than 70% of its revenue from "discount" income, that is, the fees charged to merchants when customers use American Express cards on its own "closed loop" network. The company relies on airlines, retailers, and other affinity card partners to scale transaction volume. Its closed network is considerably smaller than Visa's -- the company facilitated $717 billion in credit card purchase volume last year, versus $2.7 trillion of total payments volume Visa cleared via its credit and debit cards during the same period.

American Express' weaker operating income margin also stands out in the comparison above. If Visa grows by striving for ubiquity, American Express focuses on driving higher and more frequent transactions among its cardholders, which leads to expanded sales for merchants, and thus higher fee income for itself. The company calls this a "spend-centric" business model.

Yet to spark customer spending, American Express has to offer incentives to both its partners and cardholders, which somewhat limits profitability in the process. According to CFO Jeffrey Campbell, declines in the company's aggregate discount rate in its most recent quarter were due to a host of offsets, including cash rebate rewards on cards, corporate client incentives, and payments to co-branding partners.

Visa doesn't have a similar pressure on its transaction fee income, and its operating margin -- double that of American Express -- indicates that its open platform may ultimately prove superior.

Let's review a few more significant ratios below which address the balance sheet, dividends, and valuation:

Sources: Company SEC Filings, Ycharts, Yahoo Finance. All dollar figures in billions. TTM = Trailing Twelve Months. CAGR = Compounded Annual Growth Rate. Balance sheet data from most recently reported quarter, except for American Express Debt to Equity ratio, which is calculated as of 12/31/2015, the most recent date for which a breakdown of parent company debt versus customer receivables related debt is available.

Both companies show ample liquidity as expressed by their respective current ratios. American Express carries a bit more operational debt on its balance sheet, but neither company is in danger of being over-leveraged. For comparability, I've presented the debt to equity of the American Express parent company, removing debt which is used to fund customer receivables (which generates interest income for American Express).

The last four metrics in the table above are quite intriguing. You can see that American Express enjoys a higher return on equity, pays out a substantially higher dividend per share, and can be said to be relatively undervalued against Visa on a forward earnings basis. If we looked at these four numbers alone, wouldn't it seem that American Express represents the better buy?

Turning to the respected, notion-correcting tool called hindsight, the supposition gets contradicted: 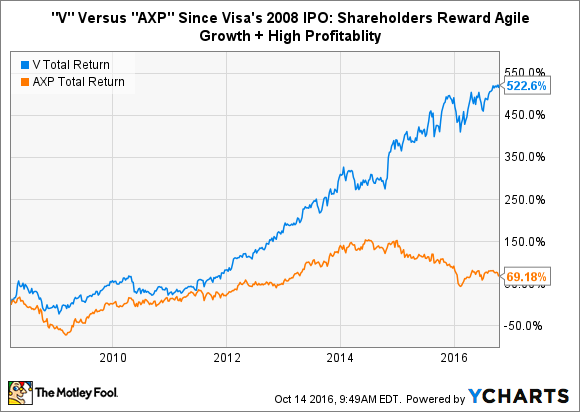 Visa simply possesses a more agile business model, which throws off considerably higher operating profit and net income margins than American Express. The chart informs us that investors have ascertained this difference from virtually the first day Visa went public in March of 2008.

Certainly, both business are on sure footing going forward. American Express, despite losing its co-branded Costco (NASDAQ:COST) card business to a partnership between Visa and Citibank (NYSE:C), has already seen some uptake on its card offers to former Costco customers. It will eventually replace this revenue through growth in its myriad other card relationships. And Visa is evolving beyond its native revenue base, as it strikes partnerships with the likes of PayPal (NASDAQ:PYPL) to increase its transaction exposure. American Express perhaps offers some upside to those looking to take advantage of a stock price slump which started in mid-2014. But the fundamental differences in these businesses point to higher potential for the "V" symbol over a longer time horizon.