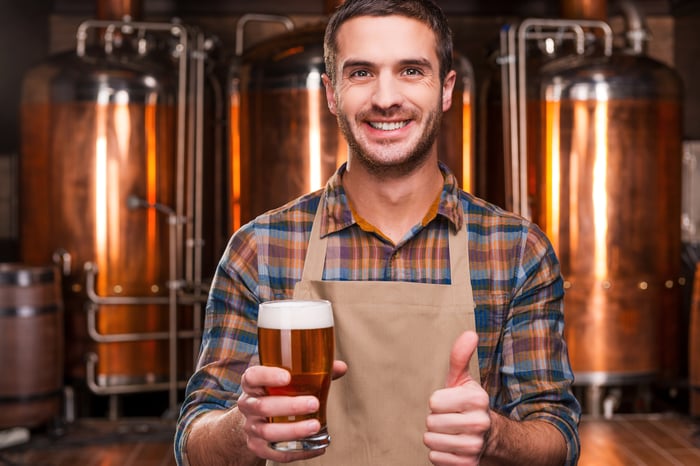 It's not likely to be happy news when craft-beer brewer Boston Beer reports earnings on Thursday, as its flagship Samuel Adams beer will probably still be in a funk. Image source: Getty Images.

When Boston Beer (NYSE:SAM) reports earnings on Thursday, most investors will immediately scan to see how its flagship Samuel Adams beer performed. Did depletions finally start to rise, or will they head south for another quarter?

Because the label was the brewer's first beer and is its most important brand, it's natural to want to see how it's doing, but this quarter investors might be better served by looking at the performance of three other brands it sells.

Now it's important to understand that Boston Beer doesn't reveal exact sales data for its different brands, not even Samuel Adams, though you can figure them out based on the broad numbers it does report.

In the second quarter, for example, Boston Beer reported that depletions fell 5% for the period "primarily due to decreases in our Samuel Adams, Angry Orchard and Traveler brands." Conversely, it said growth in its hard teas, sodas, and seltzers wasn't enough to offset the decline. Depletions are an important industry metric, as they measure sales from distributors to retailers, and so are considered a reliable proxy for consumer demand.

Still, just as food companies list ingredients on their product label in volume order from largest to smallest, Boston Beer (like pretty much all companies) delineates an item's appearance in its results roughly based on the size of its contribution. So when the brewer tells us Samuel Adams, Angry Orchard, and Traveler all contributed to falling depletions, we know the flagship brand had the worst performance, followed by its cider, and then the craft beer created by its Alchemy & Science incubator.

But those aren't necessarily the beverages to watch when Boston Beer reports earnings later this week. Instead, investors will want to watch out for these three:

Boston Beer attributes the decline in Samuel Adams to intense competitive pressure. As the Brewers Association notes, there are more breweries in America now than at any time in this country's past. The trade group says there are more than 4,200 craft breweries operating in the U.S., up 18% from the year before, and there are many more planning to open in the future. These numbers suggest the loss of market share Samuel Adams has been experiencing over the past year or more will continue into the future. 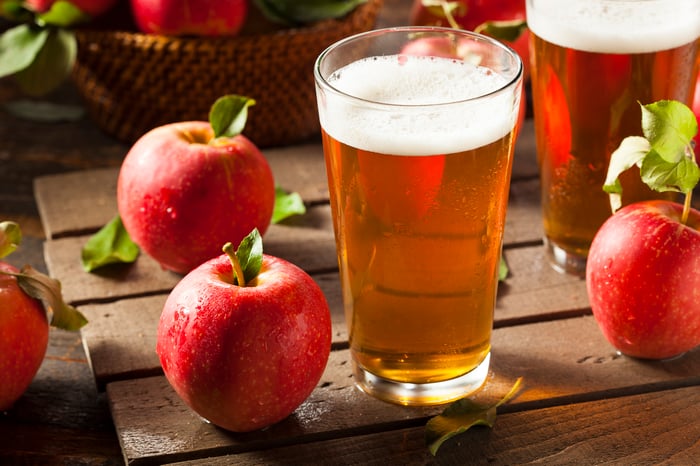 This is why the brewer has been relying more upon niche beverages to make up the difference. Angry Orchard has become something of the flagship for these alternatives, and the hard cider was chiefly responsible for carrying Boston Beer when its main brew stumbled. In 2014, when the brewer notched a 22% increase in depletions, it credited Angry Orchard as being the foremost reason behind the gains.

But that began to change in 2015, as more ciders appeared on the market and the segment was saturated. In addition to Angry Orchard, drinkers could also choose from Anheuser-Busch InBev's Stella Artois Cidre, the Crispin brand from Molson Coors, Heineken's Strongbow, and more.

At the end of last year, depletion growth had slowed to just 4%, and Angry Orchard was well down the list of contributing factors. Now depletions have turned negative, and as noted above, cider was a leading cause. Investors will want to see whether the tide has run out on cider, or if Boston Beer can turn it around once more.

That seems to be what's happening with the hard soda and seltzer brands, but in a very compressed time frame.

According to the analysts at Cowen & Company, Coney Island sales have "consistently slowed," and were down 63% from last year for the four-week period to Sept. 10. Industry site just-drinks.com quoted Cowen analyst Vivien Azer as writing, "While it had looked like cider was losing share to hard soda, over the last few months we have seen the trends reverse, with combined cider and hard soda sales now in decline."

The buffer provided by soda and seltzer was short-lived. With distiller Diageo introducing two new hard-soda lines of its own this month, the outlook for the niche is not promising. Investors need to see whether Cowen's channel checks hold up.

With little probability Samuel Adams will reverse course, it's going to be these three beverages that could determine just how far Boston Beer sinks. The outlook isn't promising, and this brewer's stock may soon sink lower.